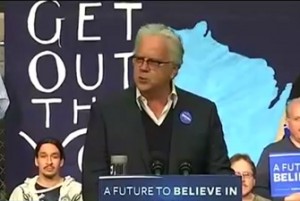 When the remark drew swift condemnation, Robbins claimed that he was taken out of context when an ABC News tweet featured a twenty second clip from the rally, but Robbins’ remark is arguably much worse the longer you let it run:

Who’s foolin’ who? Winning South Carolina in a Democratic primary is about as significant as winning Guam. No Democrat is gonna win in South Carolina in the general election. Why does these victories have so much significance? Who is winning independents? Not Hillary. Who is winning the young vote, that will do the hard work of canvassing and organizing and turning out the vote? Not Hillary.

Maybe because he’s not a Democrat, Tim Robbins doesn’t understand the significance of South Carolina in a Democratic primary, but Democrats do, just as surely as they did in 2008 when Bill Clinton made similarly dismissive comments about Barack Obama‘s impending victory there. As Hillary Clinton supporter and former South Carolina legislator Bakari Sellers pointed out, Robbins’ attack on the state’s Democratic voters is all the more vile when you consider the state’s recent past.

Robbins thinks he’s getting a raw deal, but there really is no context in which it’s okay to make any point by saying that Walter Scott and the Emanuel 9 don’t count. There just isn’t one. To frame your point that way, and then in the next breath explicitly claim that Hillary’s voters won’t “do the hard work” of turning out the vote is, at best, rank ignorance. Let’s just leave it at “at best.”

Tim Robbins says he didn’t mean any disrespect to South Carolina, but now he’s retweeting people who are accusing those offended of “playing the race card”:

Clearly, Robbins is not about to apologize, but if Bernie Sanders has any decency or intelligence, he will cut Robbins loose. Recent history suggests otherwise.