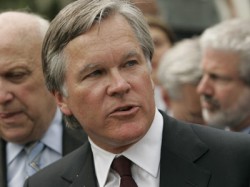 The last of his breed of media tycoon is a 79-year-old Australian billionaire whose impact has been more corrosive than cohesive.”

The media mud fight continues between the New York Times and Wall St. Journal owner Rupert Murdoch. Weeks after the Journal included a picture of Times publisher Arthur Sulzberger in an article about girly men, Times executive editor Bill Keller opted to insert a sly insult aimed at Rupe in a book review in today’s paper.

In a long review about a recent biography on famed publisher Henry R. Luce, Keller chose to conclude on this note:

By the time of his death, in 1967, that consensus had been torn asunder, and today there is no vehicle, no voice with the coherent power of Luce’s magazines in their heyday. The last of his breed of media tycoon is a 79-year-old Australian billionaire whose impact has been more corrosive than cohesive.

It would be a mistake to sentimentalize the previous century’s version of journalistic authority. But it is probably fair to say that the cacophony of today’s media — in which rumor and invective often outpace truth-testing, in which shouting heads drown out sober reflection, in which it is possible for people to feel fully informed without ever encountering an opinion that contradicts their prejudices — plays some role in the polarizing of our politics, the dysfunction of our political system and the increased cynicism of the American electorate.

Emphasis mine. Hard to miss the implication there. Considering the sort of rhetoric the front page of the New York Post regularly trucks in this is rather tame stuff, but still one can probably expect a return volley of some sort in the coming weeks.