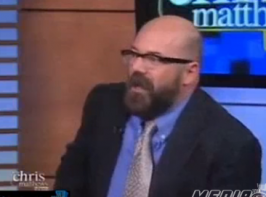 Chris Matthews this morning revisited Joe Klein’s “sedition” remarks from last Sunday, which sent the mediasphere into overdrive this week. Short refresher: Last Sunday Joe Klein told Matthews that “a lot of these statements, especially the ones coming from Glenn Beck, and to a certain extent Sarah Palin, are right up close to being seditious.”

On today’s show Matthews recapped reactions to the remark from both Glenn Beck and Bill O’Reilly and then asked his guests, which included Andrew Sullivan, Norah O’Donnell, Katty Kay, and David Ignatius for their take on Klein’s statement. Said Sullivan:

I’m more with Joe than I am with the Fox News Republican National Committee Coalition Machine. Sort of this great machine spewing out this alternative reality to reality every minute of the day. Look, dissent is great and important and I’m a free speech absolutist. But this, essentially accusing the president, the duly elected president being illegitimate and even treasonous in respect to what the United States is.

The other guests are slightly more toned down in their response, but similar in their concerns that the speech has gone from dissent to illegitimacy. Andrew Sullivan wasn’t having any of that rationale however:

Amazing to think that six short years ago Sullivan was stumping for George W. Bush. For his part, David Ignatius says that a) he doesn’t agree, and b) that if Fox News and Beck are the GOP, the party “will lose in perpetuity.” Clip below.