Bill Maher Raises Our Hopes: ‘I Would Be Happy To Go On Sean (Hannity’s) Show. But They’re Afraid.’ 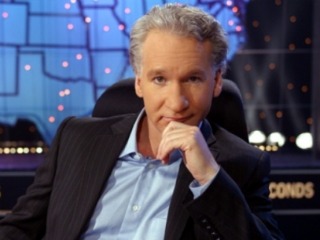 Host Myles Cochrane shared a snippet from a Hannity segment wherein he stated that Maher “hates God, he hates religion, he smokes pot, he wants to be Hugh Hefner” and that he “has a dark agenda.” Maher laughed it off. “Yeah, Sean’s a little… shall we say frustrated?,” he asked. “I don’t know. Jealous much, Sean? I think that’s what it is.” He recounted how Hannity had even brought on a therapist, Dr. Keith Ablow, to psychoanalyze him. (You remember that segment, right? It stemmed from comments Maher had made regarding Bristol Palin‘s alleged “horniness.”)

But, Maher continued, he’d be totally willing to appear on Hannity’s show himself. Although he believes that’s not terribly likely to happen:

And of course I would go on Sean’s show; I would be happy to go on Sean’s show. But they’re afraid. Of course, with the Republicans, they’re always afraid to talk to you directly. It’s so much easier to have a straw man to work with. So instead of talking to me directly, he brings on this psychiatrist to psychoanalyze me.

He added that “these people” (Republicans? Fox News personalities? Dudes named Sean?) are downright obsessed with the Playboy mansion. He describes America’s most famous bachelor pad as basically consisting of a nice backyard that plays host to some good parties. Not mentioned? It’s also a good place to pick up hepatitis. (Just kidding, of course. I have no idea. I’m never invited to parties, much less the sort where women dress like adorable woodland creatures and men wear their fancy going out pajamas.)

Also of note? Maher pretty much agreed with recent comments made by Sarah Palin (Yes! Really!) concerning what, exactly, constitutes as sexism when discussing/criticizing female political figures. If you’re a political figure, he says, you’re fair game for criticism about your views and beliefs, regardless of gender. In fact, it’d be sexist to think women in politics need to be sheltered or protected from criticism or even ridicule.

I think we know that the tail is wagging the dog when it comes to who’s running the show with the Republican party. Now, this was just a straw poll in Iowa, and Iowa is known as a place where the Republican machinery there, especially in their primary, is dominated by the Evangelicals. So of course they’re going to love somebody like Michele Bachmann.

But it’s not going to be that different from around the country. The people who vote in Republican primaries are the far, far, far right. So, as always with the Republican party, to get the nomination, you have to sell yourself to the crazies. I think this is why Tim Pawlenty dropped out the other day: Because he kind of got it that, “Look, as much as I try to pretend I’m as nuts as these other people, I can’t even pull it off when I’m lying.” These “authentic crazy people” are always going to be the ones who are going to win these straw polls and these primaries. So he got out while he had to, while he could, while he didn’t completely lose his dignity.

But, yeah, they’re going to nominate somebody who either is Michele Bachmann or is imitating what she says, because that’s what they want to hear.

Regular readers here likely know I’m not exactly cutting out pictures of Bill Maher to keep in my Trapper Keeper, but I have to admit he’s spot-on in terms of what it takes to court the Republican base and nab a nomination. I might substitute “crazies” for “members of a certain special interest group,” maybe, but the gist is relatively the same.

So. Would you like to see Maher appear on Hannity’s show? Personally, I’d rather watch him spar with O’Reilly, because I think a debate with Hannity might depend a little too much on both men being sure to remain “in character,” if that makes sense. But, all the same. I’d definitely watch.