The Politics Of Thurston Howell: How A Gilligan’s Island Character Became A Big Media Meme 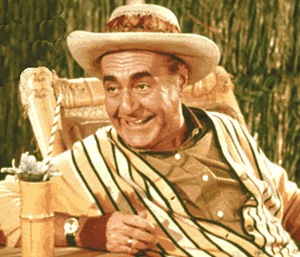 Last night, Rachel Maddow compared billionaire candidate Mitt Romney to fictional billionaire Thurston Howell III. If you’re looking for a rich-person caricature, there is no better person to cite than the oil baron of Gilligan’s Island. But it seems that 2011 is the year where both liberals and conservatives are pulling out the “You’re more like Thurston Howell than I am” card.

If you think about it, Howell can be an effective hypothetical tool to use in such a debate. He could not be more of an elitist if he tried: his demeanor, manner of speaking, and treatment of the other castaways is very snobbish.

But what truly makes Howell a perfect weapon to use is that he is unabashedly proud of his wealth. He brought thousands of dollars to the island. He brags about all his money to the others, and wife laments that during the Depression, he lost money and became “just a millionaire.” He is THE rich guy. Liberals paint him as a typical rich conservative who hoards his money and gives nothing back, while conservatives make him the stereotypical elitist liberal with no empathy for regular Americans.

Howell was used by Senator Orrin Hatch several months ago while speaking in Congress about tax hikes.

I want to be clear that I do not lump all of these folks in with Bill Gates, LeBron James, Warren Buffett, or Gilligan’s Island‘s resident millionaire Thurston Howell III.

Unlike Hatch, many conservatives have used Howell’s name in reference to establishment Democrats. Conservative blog The Last Refuge described a video of Nancy Pelosi chanting “Hands off our Medicare!” as “Mrs. Thurston Howell attempts to lead the crowd.” One blogger referenced “John (Thurston Howell III) Kerry.” And one blogger even thinks Obama is worse than Howell.

[Y]ou have America’s leader, probably one of the most aloof and indifferent presidents we have witnessed in the modern era, jetting off to the liberal enclave of Martha’s Vineyard. Were Thurston Howell III alive today he would be appalled by the presence of these neo-Marxist, capitalism-hating nogoodniks taking over “the Vineyud.” Wonder how Kennebunkport is looking these days?

But the meme has been used more often by liberals, attempting to link him to Republicans and frame them as friends of the wealthy. A letter in The Republic from earlier this month compared Howell to John Boehner, and this political cartoon illustrated the debate between Republicans and labor groups. 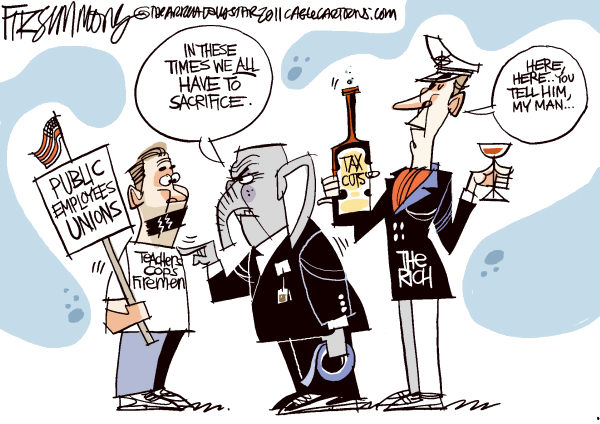 Here’s an excerpt from a PressDemocrat op-ed:

Thurston Howell III, remained rich even when paying taxes at rates much higher than those which apply today. He and Lovey Howell provide Gilligan with proof enough that the rich will do fine under most any circumstances, so it’s about time that the Skipper, Professor, Ginger and Mary Ann, together with the rest of us, demand fairness from our elected representatives.

I doubt things will be improved by President Rick Perry, who will upon inauguration give the last $32.98 in the Treasury to Thurston Howell III and ask America to pray for money.

Which brings us back full circle to Rachel Maddow. In another segment of her program last night, she played an ad for Orville Redenbacher popcorn featuring the characters of Mr. & Mrs. Howell. In the segment, which you can watch here, she insisted the ad was an “exercise in 2012 presidential campaign analysis,” and asked if this would be a year where voters would go for an obscenely wealthy candidate.

It’s all well and good for pundits to invoke fictional characters when going after their political rivals, but why this particular one? Why not Montgomery Burns, a character who still exists on TV? What about Gordon Gekko? Daddy Warbucks? George Bluth? Lex Luthor?

I’m not old enough to understand the cultural impact of Gilligan’s Island, but it seems to have left a lasting impression on people, since he has become the go-to stereotype for rich elitism even though his star has been eclipsed by many others in the media landscape. Perhaps one day we will see a campaign ad comparing Thurston Howell III to a presidential candidate. But for today’s voters, a face from an old TV show isn’t going to cut it. Update your analogies, people!