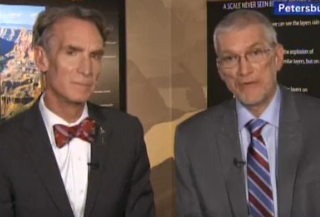 Bill Nye the Science Guy recently debated Ken Ham, founder of the Creation Museum, over evolution vs. creationism, and one of the criticisms Nye received was from fellow scientists who said he shouldn’t be debating anyone with wildly unscientific views because it implicitly suggests it’s a 50-50 debate where both sides have merit. Nye responded in an article for Skeptical Inquirer recently, claiming victory for science education as a result of the debate.

Nye compared the experience to going on Fox News, in that “I’m not much for their style, and I usually disagree with just about everything a Fox commentator has to say, but I relish the confrontation.” He acknowledged critics that said he was “foolish” to engage in debate with a creationist, but argued he felt it was important to do the debate to expose Ham’s beliefs for what they are.

I held strongly to the view that it was an opportunity to expose the well-intending Ken Ham and the support he receives from his followers as being bad for Kentucky, bad for science education, bad for the U.S., and thereby bad for humankind—I do not feel I’m exaggerating when I express it this strongly.

[T]he greatest thing that could come out of the debate would be for discussions on the topic of origins to open up around the world, for right now, secularists have largely shut down discussions in the public arena… I believe this debate did and continues to spark interest across the world about the creation/evolution issue, and has opened the door for Christians to witness to their friends and family. I have also seen more Christians (including young people) becoming more bold for their faith! Meanwhile, I ask you to continue to pray for Bill Nye.

Nye was also very confident in declaring a victory, saying in the article that “Perhaps there was no winner, as this was not a scored debate. Nevertheless by all, or a strong majority of, accounts, I bested him.”