Bill O’Reilly: ‘Tom Hanks Has Gone Off The Rails’ 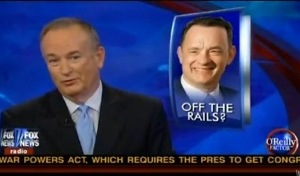 Lest we think that Bill O’Reilly was completely going soft (as we may have referenced earlier), he reminded us that he still is unafraid to cut even the most beloved of Hollywood actors. In this case, Tom Hanks was the recipient of ruthless critique over Hanks comments that were perceived to denigrate Fox News. “Mr. Hanks has gone of the rails,” O’Reilly railed, video is below.

Tom Hanks is currently promoting “The Pacific”, and HBO mini-series that he made with Stephen Spielberg, and according to O’Reilly, has refused to promote it on Fox News. But it was a quote he gave to Time magazine that put O’Reilly off:

And he is pleased that The Pacific has fulfilled an obligation to our World War II vets. He doesn’t see the series as simply eye-opening history. He hopes it offers Americans a chance to ponder the sacrifices of our current soldiers in Iraq and Afghanistan. “From the outset, we wanted to make people wonder how our troops can re-enter society in the first place,” Hanks says. “How could they just pick up their lives and get on with the rest of us? Back in World War II, we viewed the Japanese as ‘yellow, slant-eyed dogs’ that believed in different gods. They were out to kill us because our way of living was different. We, in turn, wanted to annihilate them because they were different. Does that sound familiar, by any chance, to what’s going on today?”

Turns out that O’Reilly’s father served in Japan during WW II and took great exception. He had on left of center radio host Mark Levine to discuss, but O’Reilly made clear his disdain for Hanks (who had heretofore remained fairly agnostic on the political spectrum.)