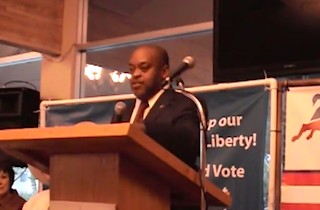 Niger Innis, a former Herman Cain adviser and frequent Hannity guest, is currently running to represent Nevada’s 4th congressional district, which just happens to be the home of Cliven Bundy’s disputed ranch. At an event Saturday, Innis offered up a strong defense of Bundy, saying that contrary to popular opinion, the rancher is not “racist at all.”

As he made his way to the podium, Innis embraced Bundy, who was seated to his right as he delivered some brief remarks. He described how he met Bundy in the midst of his tense stand-off with the federal government over unpaid grazing fees. After charming the crowd in attendance with a story about how Bundy’s wife insisted on serving him a sandwich, Innis turned more serious.

“This is the game the media is going to play with us to distract from the real issue, which is that the federal government has too much control over Nevada’s land,” Innis said. “They will try to distract, with the firestorm that Cliven started by using the r-word, the racism word.”

“I can only tell you my experience with the Bundys,” he continued. “Having eaten with them and broken bread with them and I don’t consider Cliven or his wonderful family racist at all. Period, end of story.”

The right’s vociferous support of Bundy mostly fizzled after he was recorded talking about “the Negro,” and wondering whether they were “better off as slaves.”