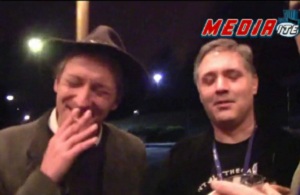 This is why we can’t have nice things. Well, why you can’t have nice things, and by “you,” I mean the conservative blogosphere. Following the Mitt Romney campaign’s first-ever off-the-record meeting with about 60 conservative bloggers, mainly so they could complain about not being fed “scoops” by the campaign, that meeting’s attendees set about making sure it would be the last. The latest is Robert Stacy McCain, who has cleverly posted the names of every attendee the bourbon didn’t erase from his memory.

It seems as though, even before McCain’s revelation, this meeting had more leaks than a discount urologist’s waiting room, as details of the meeting were showered on HuffPo‘s Mike Calderone, Buzzfeed, Slate‘s Dave Weigel, and even that free Apartment Guide they give out at convenience stores.

Nothing particularly Earth-shattering emerged from the meeting, other than the fact that the Romney campaign appears to have woken up to the power of blogs thanks to the lightning-in-a-bottle Hilary Rosen kerfuffle, but it did expose a fair number of conservative bloggers as connoisseurs of fine whine. A good portion of the meeting was spent complaining about being ignored by the campaign (kinda like screaming during the first 20 minutes of The Hunger Games about how you never get to go to the movies), and about not being fed “scoops” by the campaign.  Here’s a little hint: there’s a reason politicians pick certain outlets to constantly feed their leaks to, and it’s not a compliment.

As if that Kleenex Of Secrecy wasn’t bad enough, though, R.S. McCain (“The Other McCain”) shot the last nail into the Romney campaign’s blogger outreach coffin. Following a list of about 30 of the 60 or so attendees, McCain explained the weighty reason he had decided to out the meeting’s attendees:

You may ask: “What do these people have in common?”

Answer: They are all notorious right-wing liars.

So if any of them claim they were all together at a “secret meeting” with a so-called VIP Wednesday afternoon in D.C., don’t believe a word of it.

If someone tries to tell you that my phone rang in the middle of the alleged “meeting” and that, while trying to turn off my phone, I knocked over my coffee cup, which spilled in Alana Goodman’s lap . . .?

Which isn’t to say that Dan is incapable of ass-kissing – “Oh, thank you and your lovely wife for favoring us with your gracious presence, Governor” – but I’m pretty sure that Ace would have described him as an “obsequious sycophant” rather than a mere ass-kisser, had they ever been sitting next to each other in a meeting with a VIP, which they so obviously weren’t.

Never trust those lying liars. Because they lie.

If you’re still wondering what the point of that was, other than to make sure everyone knows that RS McCain was there and wackiness ensued, join the club. It’s too bad, because some of the people on that list (and some that aren’t) are hard-working friends of mine, and probably could have made good use of the Romney campaign’s now-doomed blogger outreach. On the bright side, most of them are real journalists, and know how to go find their own scoops.