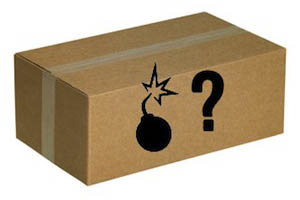 Just like we enjoy to see lowly animals behave in human ways, there’s nothing more entertaining than seeing relatable human errors committed in extremely heightened situations. That’s why celebrity tabloids all have “They’re Just Like Us!” sections. However, while it’s hilarious to see, say, the President of the United States get locked out of the Oval Office (he’s just like us!), it’s slightly less humorous to read this story about some security guards in a Detroit federal building forgetting to screen a package for three weeks before realizing it’s actually a bomb.

I know what you’re thinking; “How can a bomb just lie around in an building that’s home to FBI agents, the Social Security Administration, and a US State Senator?” Well, the bomb wasn’t just sitting out in the open. No, it was in Lost and Found.

“The guard brought the package into the building and put it in ‘lost and found’ without having it screened, Wright said. It sat until March 18, when someone decided to X-ray the package and found that it might contain a bomb, he said.

The guards then notified the Federal Protective Service and Detroit police and the package was moved outside the building, where the police bomb squad recovered it, he said.

Detroit police said they recovered a package on Friday from the federal building and detonated it.”

Of course, it’s possible this wasn’t an accident. Maybe the security team just did this to pass the time until Rep. Randy Forbes’ bill about federal buildings passes and “In God we trust” gets chiseled into the wall. After all, there’s no better way to show you have faith in the Almighty than just relaxing with a bomb under your desk for three weeks.