Brand Hack: GOP.com Not Exactly Great For The Republican Brand 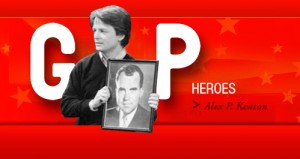 The hits just keep on coming. The Republican National Committee flubbed the roll out of their new web identity in glorious, grand ole, fashion on their own yesterday. Today the dark underbelly of the internet decided to help them finish the job. What’s a conservative to do?

Twenty-four hours into the life of the RNC’s new web site and parodies of the Faces of GOP web banner were circulating on the internet. Some are apt, some are funny and naturally, most are offensive.

Political satire blog Wonkette took a lighthearted approach, trying their best to give the nameless faces some semblance of identity. They think they identified civil liberties blogger Glenn Greenwald among the bunch! How’d he get in there?

Across the web, countless bloggers and designers are trying their hand at “user generated content,” creating their vision of the Faces of the GOP. Alex P. Keaton, one of the most notable Republicans of the 1980s, stars holding a framed photo of Richard Nixon. Of course, not all are carried out in good taste, as RNC stud Levi Johnston makes a cameo. And others are highly inflammatory. One such spoof features entertainment legend Al Jolson in black face. And then of course, there’s Kanye West — no stranger to internet memes himself. 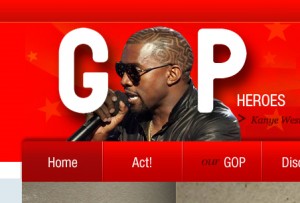 It’s obvious that the RNC never imagined this many branding mistakes in one project, let alone one day. On top of sloppy mistakes made in rushing the product to the market place, failing to understand the internet, that this product was allowed to see the light of day proves that the RNC remains clueless about the state of their brand.

The RNC is limited in responding to brand hacks. If they try and remove the negative remixes they come off a censures and draw attention to a non-issue. The hacks clearly illustrate the incongruity in the visual identity the RNC choses to display and the underlying message of todays Republican party.

Brands should expect the remix culture of the internet, and acknowledge that they can’t control what happens to an identity once it goes viral on the internet. Over at brandchannel, I implored the RNC to align their new identity with their messaging, lest the youth audience they seek to appeal to find it transparent. Too late.