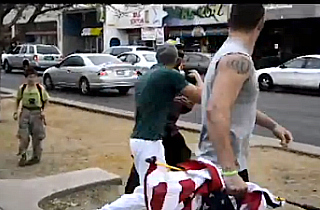 Over the past week there was a series of jokes going around Twitter amongst myself and my America-hating liberal pals called Marine Todd, that satirized the sort of sanctimonious, military- and Christianity-worshipping right wing memes so often shared among conservatives on Facebook. As Raw Story’s Amanda Marcotte described it, “Forwarding urban legends crafted to assure reactionaries that liberals are crazy and God is on their side sometimes seems like 75% of intra-conservative online communications. This one was particularly bad because it endorsed using violence to shut down those scary atheists that might make you do something uncomfortable like think for a moment.”

I wasn’t going to bring it up here, or anywhere else any more, since it’s been pretty well covered –- check out Gawker’s “‘Marine Todd’ Is an Awesomely Stupid Right-Wing Meme That Got Hijacked” to get up to speed –- and because I’m frankly sick of getting Twitter notifications about it, but this glorious video from the Albuquerque Police Department protests from the other day has convinced me that Marine Todd is real, and he walks among us.

The protests are in response to the excessive force used by the police department, including a recent fatal shooting of a homeless man. In the protests on Sunday, the second in a week, police used tear gas on citizens who had taken to the streets to protest the police’s use of violence against citizens.

This sort of contradictory militarized mindset of the contemporary conservative is perfectly illustrated in the video. In it two brave men, one of whom identifies himself as a member of the marines in both his words, t-shirt, and generally violent comportment, chase down two hippies on a scooter who are carrying an upside down American flag and probably on their way to to enact some insidious terroristic plot. When approached by what looks like a crustpunk Cheech to ask what they’re up to, IRL Marine Todd here yells: “I don’t give a shit what the symbol is. We serve our fucking country.”

In other words, the brave men and women of the American military put their lives on the line every day so lib pukes like this can spout their freedom-hating nonsense. Except when they actually see them doing it, in which case they use their physical power to stop it. For liberty, or something.

As has been pointed out numerous times about the Marine Todd gag, the joke wasn’t actually on the Marines themselves, it was about the anti-intellectual rubes who fall this type of deification of the military. Not this time.

Victorious, our two saviors of democracy storm off into the distance where they walk into a Middle Eastern restaurant, presumably to punch out some Muslims.