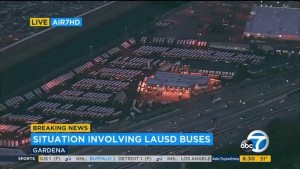 All schools in the Los Angeles Unified School District were closed on Tuesday due to a “credible terror threat.”

According to KTLA, school district officials and police confirmed the news early Tuesday morning. A short press conference was held after the initial announcement.

Reporter Jason Martinez tweeted about the terror-related closure, as well as the possible reasoning behind it.

BREAKING: All LA schools closed today due to terror threat.

According to reporter Ben Shapiro, the LAUSD shutdown involves some 900 schools and around 640,000 students.

WOW. LAUSD shutdown, for those who don't know, involves 900 schools and 640,000 students. Must be one hell of a terror threat.

UPDATE–10:11 a.m. ET: According to the Los Angeles Times, a bomb threat was called into one of the LAUSD’s board members.

The threat involved backpacks and bags being loaded with explosive materials at several LAUSD schools.

LAUSD superintendent : Threat made to many schools, involved packages and backpacks

UPDATE–10:23 a.m. ET: The threat made to the school board member was delivered electronically, and didn’t target a specific school or schools in the LAUSD. In addition, the FBI is now involved.

LAUSD: The threat did not specifically identify 1 school but "many schools." pic.twitter.com/esVghSxq1X

UPDATE–11:49 a.m. ET: According to the Associated Press, New York City officials received a similar threat but determined it was a hoax.

A law enforcement official affiliated with the investigation told the AP that the electronic threat allegedly came from overseas.

UPDATE–12:39 p.m. ET: New York City Police Commissioner Bill Bratton told reporters that whoever sent the electronic threat to NYC, which is reportedly similar to the threat Los Angeles received, was reminiscent of plot patterns in the TV show Homeland.

.@CommissBratton suggests person behind the hoax may be a fan of Homeland because threat follows recent plot patterns

In addition, CNN reports that the threat was riddled with spelling and capitalization errors suggesting that its author wasn’t a Jihadist. For example, “Allah” was not capitalized.

UPDATE–1:11 p.m. ET: School superintendent Ramon Cortines told reporters at a press conference that he “could not take the chance” regarding whether or not the threat was a hoax.

Mediaite will update this post throughout the day as more information becomes available.