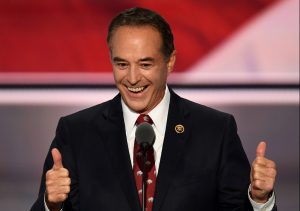 Rep. Chris Collins (R-NY) has been arrested and will be indicted on charges of insider trading, Federal prosecutors announced Wednesday morning. (via CNBC)

The indictment (via Buzzfeed’s Michael Hayes) charges Collins and his son with insider trading relating to securities of Innate Immunotherapeutics — an Australian biotech company. Collins, per the indictment, served on the company’s board of directors. According to The New York Times, Collins is accused of selling his stock in the company before a failed test result for one of its drugs was made public. The indictment charges Collins with notifying his son, Cameron Collins, of the failed test just minutes after he learned the news. Cameron is then alleged to have sold the shares — avoiding a loss of approximately $750,000.

Collins gained prominence for being one of the earliest Capitol Hill backers of President Donald Trump. His visibility in the party increased as a result.

In a statement published by the Times, Jonathan Barr and Jonathan New — serving as attorneys for Collins — responded to the allegation.

“We will answer the charges filed against Congressman Collins in court and will mount a vigorous defense to clear his good name,” the lawyers said. “It is notable that even the government does not allege that Congressman Collins traded a single share [of Innate stock].”