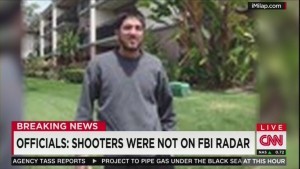 Vaughn Sterling, the Senior Producer of The Situation Room, took to Twitter to report the following from CNN reporter Evan Perez:

No specific information has been released regarding possible connections between Farook and his wife Tashfeen Malik to terror groups abroad. According to CNN, officials have announced that Farook visited Saudi Arabia in 2013, though no specific relationship with those groups have been announced.

Perez spoke with CNN host Chris Cuomo moments ago about the new developments. “We also know they’re looking at overseas communications,” reported Perez. He continued, “Now we don’t know whether that indicates that anybody was ordering what happened yesterday to occur — again, there’s no indication of that yet.”

Watch the above video report from CNN. We will update this post as more information becomes available.

UPDATE–1:22 p.m. ET: New details emerged Thursday indicating suspect Syed Farook was radicalized prior to carrying out Wednesday’s massacre San Bernardino, CA. The FBI said they are looking into the possibility that Farook travelled overseas to Pakistan in addition to Saudi Arabia, and are investigating how that may be linked to the massacre. Farook’s wife Tashfeen Malik held a Pakistani passport with a K1 (Spousal) visa.

The FBI said they uncovered evidence that Farook was in contact with domestic and international extremists. A source also told CBS News the suspects viewed ISIS propaganda online.

FBI says male shooter traveled overseas to Pakistan and FBI is investigating how that may be linked to the case. #SanBernadinoShooting

FBI says female shooter had Pakistani passport, in US on K-1 visa. K-1 nonimmigrant visa allows fiancée in US for 90 days to get married.

FBI uncovered evidence that Farook was in contact with extremists domestically and abroad, including US https://t.co/FIp089lh85