Breitbart.com Dubs Jimmy Kimmel ‘Comedy Coward’ For Not Knowing How To Mock Obama 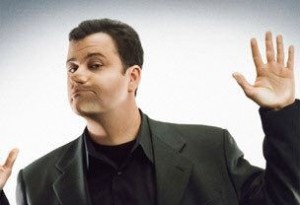 White House Correspondents Dinner headliner and Jimmy Kimmel Live host Jimmy Kimmel has incurred the wrath of the humorless right for telling Reuters that “It’s hard to make fun of Obama in general because he’s a cool character,” adding that “outside of his ears, there’s not a whole lot” to joke about. Breitbart.com’s John Nolte dubbed Kimmel a “Comedy Coward,” but rather than curse the darkness, lit a candle of hilarity to guide the late-night host through the comedy darkness.

While it’s true that if you have an unreasonable hatred for Barack Obama, the task of mocking him becomes much simpler, there are still plenty of jokes Kimmel can make that don’t include the words “Solyndra,” “light bulbs,” or “Mau-Mau.” Hell, the President himself did a creditable job on himself at last year’s WHCD, even as Seal Team Six was busy roasting Osama bin Laden. From that perspective, Kimmel’s remark could fairly be seen as a cop-out.

But he’s right that the President is a “cool character,” an observation that probably drives the likes of John Nolte crazier than anything. The President’s “X-factor” only increases with every day he stands across from presumptive Republican nominee Mitt Romney, who is about as cool as a Pat Boone roadie. Again, liberals ought to be able to empathize with this somewhat, thinking back on all the times we fumed when the guy we hated was called “relatable,” and our guy was called “wooden.”

What gets me is the humorlessness of it all. First of all, everyone knows the letter “K” is hilarious, so Nolte missed a golden opportunity to make his headline “Komedy Koward Kimmel,” but beyond that, Nolte offers up some fertile ground for Kimmel to till:

Does Jimmy Kimmel know Obama ate a dog or that he’s unnaturally attached to a teleprompter and that he’s currently responsible for the worst “recovery” since the Great Depression? How about Obama’s “War on Everything…” or “corpse-man” or his ears?

Really, John? The Teleprompter? You want him to do some jokes about the President’s MySpace page while he’s at it? Maybe work in a Spice Girls reference or two?

And how many punchlines do you ever hear with “corpse” or “the Great Depression” in them? And wasn’t that “corpse-man” flub, like, 3 years ago?

Even though he’s not giving me a lot to work with, I’m going to see if I can write Jimmy Kimmel some material using only what Nolte has laid out here: Dog-eating, teleprompters, the Great Depression, Obama’s “War on Everything,” corpse-man, and his ears. Here goes.

Hey, everybody, welcome to the White House Correspondents Dinner, where, in keeping with our guest of honor, the appetizer course will be Shih Tzu kebabs, the entree is German Shepherd’s Pie, and for dessert, crème brûlée. Instead of using a torch, though, we’re going to caramelize them with puppies we’ve lit on fire.

By now, I guess you’ve all heard that President Obama ate dog meat as a young child. In related news, Ann Coulter is now demanding Secret Service protection. (pause) Wow. Ruff crowd. I think I need to (holds hands up) paws for a moment.

Of course, you’d never know the President had eaten dog by the way Congress acts. You would think they’d throw the guy a bone once in awhile.

And what are the odds he would end up running against a guy who once drove all the way to Canada with a dog on the roof of his car, who just barely beat the “Man on Dog” guy? I’m waiting for Michael Vick to announce a third party run.

Did you hear that President Obama once said “corpse-man” instead of “corpsman?” I don’t have a joke for that, I just think it’s fucking funny. But it would make an awesome comic book, “Corpse-Man!” We could make it Scratch ‘n Sniff.

Have you noticed that as soon as the Obama administration decided to stop calling it “The War On Terror,” we actually started to win it? They called it the “global struggle against extremism.”

Maybe we should try that with the “War on Drugs.” Legalize marijuana, and call it the “local struggle against Doritos and White Castle.”

Lots of people took that “corpse-man” thing as a sign that the President relies on his teleprompter too much, but c’mon, this is the 21st century. If anything, Obama is kind of a jerk for not lending the thing to Biden once in awhile.

Didja ever notice how we’re in the worst “recovery” since the Great Depression? The President likes to take credit for things like saving the auto industry, but what good are cars if we can’t afford elevators for them?