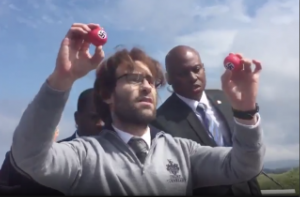 Donald Trump might not be in America right now, but that’s not stopping his critics from finding ways to interfere with his engagements.

Trump appeared in Turnberry, Scotland this morning for the re-opening of his new golf course, and he gave a speech/press conference at the ninth hole. Just as he stepped up to the podium however, comedian and notorious UK prankster Lee Nelson got in front of the crowd and started saying he “forgot” to hand out the golf balls his club requested.

Nelson appeared in one of Trump Turnberry’s uniforms, but he as tossed a few balls towards Trump and held them for people to see, it was clear that they were red and emblazoned with the Nazi Swastika. “The new balls are available from the clubhouse as part of a new Trump Turnberry range,” Nelson said.

Obviously, Trump wasn’t amused, and he ordered his security staff to “get him out.” This is not the only bit of protesting the Donald will be seeing today, seeing as how Scottish locals have taken to flying the Mexican flag within sight of the Turnberry golf house.

This isn’t the first time Nelson’s pranks have netted him the spotlight. He earned notoriety last year when he made it rain on FIFA’s Sepp Blatter in the middle of his corruption scandal.

Trump’s presser ended up putting a great deal of focus on the Brexit vote, where he applauded the decision, made parallels to his presidential campaign, and took a few jabs at President Obama.

Watch above, via Daily Mirror.