Bush is Silenced by His Own Hosts During Speech: ‘They’re Kicking Me Out the Door’ 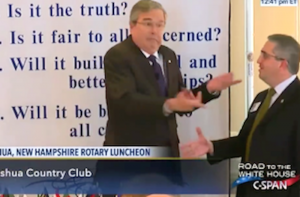 Full disclosure: I feel weirdly defensive of GOP presidential candidate Jeb Bush. I don’t know why. I just hate to see people being personally beaten on in the media and when it comes to Bush, that’s been happening with some frequency.

If the attacks were on Bush’s policy, they’d be fair. Sadly, they’re attacks on his meek nature and all the money he and his donors have sunk into this failing campaign.

The man’s character has been getting a whooping from Trump, sure, but has also been doing a decent job of embarrassing himself on his own. Remember when he asked a crowd gathered to hear him speak in New Hampshire to “please clap” when he finished talking? I was so worked up for him that my coworkers found my palpable distress amusing and now send me “please clap” memes all the time.

Remember when, in one of his recent interviews with his mother, Barbara Bush, he refuted her assertion that he’s too polite by saying, “I’ve gotten better at interrupting, Mom!”? Reader, it broke me.

This most recent example of Bush’s sad campaign ruined my entire night last night. I had to take some time to ruminate and practice a little self-care. I feel ready to share this video with you now. Know that it breaks my heart and that hugging Jeb Bush has now become the number-one goal on my bucket list.

Here is Bush being told by his hosts at a rotary club in New Hampshire that his speaking time had come to a complete end and he needed to get off the stage immediately:

Jeb Bush gets cut off by his own hosts, solidifies status as the saddest candidate in the election.

Pay close attention to the old-timey comedic music and the disheartened look on the candidate’s face as he looks around and eventually just sits down in the crowd of people who were ostensibly gathered to see him. Click over to HuffPost Politics‘s page on Facebook and read the comments. One person describes Bush as “the Eeyore of this entire campaign season.”

Now that I’ve had to watch this again, I’m feeling sad once more. For neither the first nor last time, Bush’s pitiful pitfall has brought down my whole day.