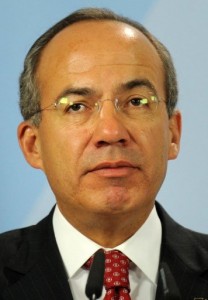 There’s plenty of blame to go around when it comes to the violence of Mexico’s Drug War. To be fair, Calderon’s editorial also cites lack of education or alternative work opportunities for his citizens. But it’s difficult not to conclude that Calderon is taking pot shots after the deadliest week of drug-related violence. He writes:

The origin of our violence problem begins with the fact that Mexico is located next to the country that has the highest levels of drug consumption in the world…It is as if our neighbor were the biggest drug addict in the world.

It’s an amazing statement coming from a president who’s has made cracking down on drug violence a major cornerstone of his administration, and who, in recent weeks, seems to be loosing control of the situation. Over 23,000 people have been killed in drug-related violence since Calderon took office in December 2006 and launched his government crackdown on the drug cartels. But this June is shaping up to be one of the bloodiest months yet. From the Washington Post:

The Mexican newspapers that keep running tallies of drug-related violence reported last week that a record was set when 85 people died in a 24-hour period… But the pace of killing quickened. On Monday, El Universal newspaper reported that 96 people in seven states died, and another record was set.

Calderon’s criticism does have some traction. The Washington Post estimates that somewhere between 10 and 25 billion dollars in drug profits flow from the U.S. to Mexico each year.  And that’s to say nothing of the difficult-to-estimate number of weapons spilling over the border into the hands of Mexican cartel members.

At the same time, however, the U.S. is funneling tremendous amounts of monetary aid into Calderon’s drug war, helping to fund everything from drug-sniffing dogs to efforts to reform the police force and court system. The U.S. certainly can’t deny the roll it plays in providing a market for Mexico’s drug cartels, but the irony of fighting cartels that we might in fact be encouraging is ours to deal with. That Calderon is resorting to potshots as the violence in his country continues to escalate, meanwhile, is hardly reassuring.