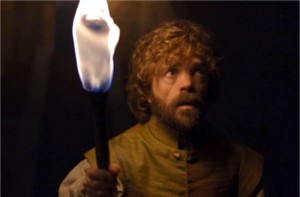 “What is dead may never die.”

After 1.9 episodes of teasing deferment, after bottomless threads of internet speculation, we got the much-heralded resurrection of Jon Snow in the final second of the new season’s second episode. And perhaps the only thing actually surprising about it is that it happened in precisely the unsurprising manner that everyone expected.

In what might be described as some Westerosi object lesson in Occam’s Razor, the (former) Lord Commander of the Night’s Watch was zapped back to life by the magic of the Lord of Light. Of all the myriad way he might have been rebooted, that was the most obvious, but who cares?

There is precedent for this. We last saw the Lord of Light pull this little trick via one of his earthly avatars in Season 3’s “Dark Wings, Dark Words,” when Thoros of Myr, of the Brotherhood Without Banners, brought one of his compatriots back to life, saying: “It’s the Lord of Light brings you back. I’m just a lucky drunk who says the words.”

It was just one of many ways the second episode of season 6 harkened back to earlier days. If last week’s “The Red Woman” was a quick-and-dirty reminder where we left everyone at the end of season 5, “Home” took a somewhat longer view: revisiting stories and characters that had been left languishing on the show’s cutting room floor, some of them for years now. A homecoming, indeed.

We saw — for the first time since season 4 — the return of Bran under the tutelage of the Three-Eyed Raven, along with his compatriots Meera Reed and Hodor (née Willis!). Via the Christmas Carol-esque lessons of the aged Raven, we got to walk through Winterfell in its halcyon days. We witnessed young Eddard (Ned) Stark sparring with younger Benjen, and Lyanna, that accidental instigator of Robert’s Rebellion, riding carefree through the courtyard on her horse. It’s only the second flashback we’ve ever gotten in a show that (let’s face it) really could have used them, and — if forensic analysis of this season’s trailers are to be believed — the first of many to come this year.

And then, we got the return of the Ironborn, also unseen since Season 4, and still apparently plotting their rebellion against the Seven Kingdoms, for all the mind said Kingdoms have been paying them of late. Balon Grayjoy is reintroduced and murdered by his messianically deranged brother Euron, whom we’ve no sooner met than we see him portentously proclaiming himself the reincarnation of the Iron Islands’ deity, the Drowned God.

“I am the storm. The first storm and the last. And you’re in my way,” he says, before deposing his brother by tossing him off a bridge — an act of fratricide that might carry more weight if the show had spent any time with these characters.

Which brings us back to the central problem of the show these days: With so much going on, and so many subplots to be advanced, does the show have the time and patience to create powerful, sustained scenes anymore, or is every episode going to be merely a checklist of moments dutifully advancing all 20-something threads toward the finale?

That’s how it felt when Ramsey Bolton gutted his father and fed his step-mother and baby half-brother to the dogs. Or when Tommen Baratheon, simultaneously the king and the show’s most impotent character, begged his mother for help and forgiveness after failing her so spectacularly. Or when Arya’s trial-by-being-blind-beggar came to an abrupt end and she was welcomed back into the fold of the Faceless Men.

And, folks, I’m worried about Tyrion. I’m concerned that the show’s smartest and most compelling character is going to fall victim to what I’m calling the “Meereen Mire.” That troubled city has a disquieting way of putting the skids on a character’s momentum. Daenerys’ story, which had such relentless velocity for the first three seasons, came to a grinding halt when she came upon this wretched city at the ass-end of the world and decided to solve all its problems.

But my favorite scene was, without a doubt, Tyrion’s heart-to-heart with the dragons: a reminder that what makes the show so powerful is not its explosive moments of sadism or its ever-expanding reliance upon Fire Magic and Valyrian Voodoo. For all the political machinations and violent maneuvers in this show, the most powerful, primal war scenes play themselves out at home, in candlelit rooms, or on ditches by the side of the Kingsroad. This is a show about powerful one-on-ones: Jaime Lannister quietly talking a man into death, Arya’s battle of wits with Tywin Lannister in Harrenhall, Varys sparring with Littlefinger, and so on.

We got a little taste of that old Game of Thrones magic this week when Jaime faced off against the High Sparrow in the Sept of Baelor, over the corpse of his daughter-niece Myrcella. As the number of subplots tops something like two-dozen, I hope the show will slow down and rediscover the focus and restraint to deliver those quiet moments again.

“I was home,” Brandon muses, after being summoned away from his dream vision of bygone days. “Home” is also where Reek (née Theon Greyjoy) wants to go back to. And I’d like to think that “Home” (the episode) signals a forthcoming return not merely to the show’s old stories, but to an older way of telling them.

What did you think of Jon Snow’s resurrection scene? Was it everything you wanted it to be? The preview of next week indicates were going to finally see Robert’s Rebellion. What other flashbacks should the show revisit? Let us know in the comments below.