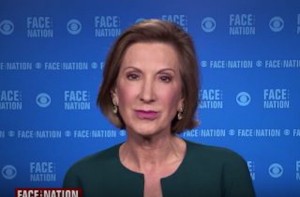 Poor Carly Fiorina hasn’t had a lot to cheer about lately, what with her demotion to the WGAF Kiddie Table Debate and inability to recapture her imaginary fetal snuff film buzz. There is at least one thing that Carly Fiorina kicks ass at, and that is getting me to read her campaign’s fundraising emails.

That’s not easy to do. I look at press emails for all of the campaigns, but it is very rare that I actually read one of the many “supporter” emails I get, yet I have already been rooked into opening several of Carly’s. Sometimes, it’s a simple trick, like asking me for $13 so I’ll open the email to find out why thirteen dollars?!?

On Tuesday morning, it was this irresistible subject line: “LEADING in this new poll”.

If you’ve been following the polls at all recently, you’ll know that it might as well have read “PHOTOS of Donald Trump blowing a unicorn,” but I had to know. Here’s some of the email:

Tom,
We’re leading the pack in a brand-new poll: I have the highest approval rating (and lowest disapproval rating) of any candidate running for President right now.

That’s right: according to early state polling, I’m more well-liked than every single one of my opponents, Republican or Democrats: Marco Rubio, Donald Trump, Ted Cruz, Hillary Clinton—you name it. Everybody.

This poll shows that all the hard work we’ve put in is starting to pay off: I’ve been earning the trust, respect, and affection of the American people—even if I haven’t yet won their vote.

But it’s also clear: we have a lot of work still to do, in order to turn this support into on-the-ground votes. That means continuing to battle the political class, fight the mainstream media, and make sure our message reaches the American people directly in the days to come.

With only 21 days until the American people start voting, I need your help immediately if we’re going to shake up this election.

Can I count on your support once more, right now? Please: invest $13 right away, to help us turn our supporters into primary voters in the next 21 days.

There’s that $13 again, which still has not been explained, and now, I have to go and find the poll Carly’s bragging about, because she didn’t link to it or name it. Her net favorability in the RCP average is minus ten.

I will make you a deal, Carly. I’m not going to vote for you, but if you explain why you chose to ask for $13, and identify the polls you cite in your emails, I will give you $13 in cash money. And if this whole “President” thing doesn’t work out, I think I can get you in at Mediaite as a headline writer.

I’m a man of my word though, so if Flores can explain the $13 ask, I will still send it in. Maybe I can expense it.