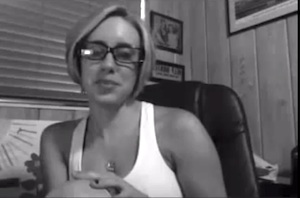 A video diary of Casey Anthony has leaked onto the Internet, and it has been confirmed, by several news sources, that it is really her, with what appears to be shorter, dyed-blonde hair, and glasses.

“It’s just a little surreal how much things have changed since July, and how many things haven’t changed,” Anthony divulges to the camera, sharing that she’s adopted a dog. “It’s been a long time since I’ve been able to call something mine,” she said. The video appeared on the HollyandJonBriley YouTube channel.

Watch the four-minute video clip below. We’ll update the story as it develops.

UPDATE 1: Here is the transcript of the video diary:

So this is my first video diary, it is October 13th, which is a Thursday, 2011, and I’m just trying to figure out my new computer and I don’t know, I guess I’m liking it so far. It’s obviously a different ballgame for me, because I’ve never used this before. So, I guess these will be as tedious as my audio recordings have been. To start off this one, just a few updates from the last few days, there really hasn’t been all that much going on, except now for this and I’m extremely excited that I’ll be able to Skype and obviously keep a video log, take some pictures… and then I have something to finally call mine. It’s been a long time since I’ve been able to call something mine, and now that I have something even — you know, it’s silly to say I have a computer. And a camera and a phone, granted, I wouldn’t have a phone without (inaudible) and know I’ve now actually paid for my own computer, the camera was a gift, these are things I don’t have to give back. It’s kind of nice to say I have some belongings that are mine that I’ll be able to keep with me when I leave next year. It’s kind of funny to think about, actually. It’s going to be a while before I leave, I’m going to be here for many months more, I’m going to be here for 6 months, even if I get off probation early.

I’ll still be here at least until February… the end of February. Seven months, March, my birthday, just either way, you know, whether it’s six months or it’s a year from now or a year from middle of August. I don’t know. It’s just been a blessing in so many ways. And now I have someone to talk to when I’m by myself so I’m not bothering the poor dog. Who I’ve adopted and I love and he’s as much my dog as any of the other pets I’ve ever had (inaudible) families I’ve ever had if not moreso… so… I don’t know… I don’t know whether to look directly at myself, or look up, or… oh man… just a little surreal how much things have changed since July and how many things haven’t changed… but the good thing is that things are starting to look up and things are starting to change. In a good way. Let’s just hope they stay… that things stay good and that they only get better. They’ll only get better. So this is the end of my first video log. I’ll probably do one later. Maybe I’ll bring the dog, who knows. But this is again the first of many and I’m looking forward to this. It’s a little scary because I hate being on camera, but I don’t know. I need to conquer that fear at some point. This is a good start. So here’s something. It’s the end of the first. Just the beginning.

“What would be the point of disguising your identity — changing your hair color, glasses, et cetera — if you’re going to then release the video? Which would seem to indicate that she didn’t release it.”

He adds that once Anthony’s criminal appeal is wrapped up, she will, eventually, be forced to testify in a civil case, “the same way O.J. Simpson did.” Watch his analysis below: