Chinese Commenters Are Meaner to American Politicians than Americans Are

Chinese Commenters Are Meaner to American Politicians than Americans Are 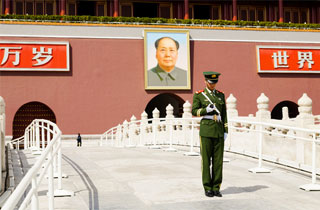 If you’re worried that China’s economy is going to outpace America’s, here’s another thing to worry about: Chinese internet political rhetoric has already caught up, and in some cases, surpassed our ability to insult our U.S. government officials.

While Hillary Clinton may not be a popular candidate among conservatives, Foreign Policy reports that socialist China — at least, the population that has access to the internet — may like Hillary even less, calling her an “old witch” who would lead America to World War III. This likely stems from her policies towards China during her tenure as Secretary of State, causing her to become, in the words of China’s Global Times, “the most hated U.S. political figure” on the Chinese internet.

Worried that China won’t surpass American sexism? Have no fear! Upon her announcement of her candidacy, the most popular comment on Weibo said this: “If Hillary gets elected, she will be the only woman in the world who has done the U.S. President and been the U.S. President.” (Gotta say, we don’t hear that one over here!)

At least their invective is bipartisan — they’re just as insulting to Republican candidates as well, though it depends on what you’d consider “insulting”:

Face it, for Ted Cruz, being ignored is the worst insult.

And when he’s being compared to a Communist leader, a certain libertarian gets the worst insult of all:

The exception appears to be Senator Rand Paul (Ke-R): he’s gotten some shoutouts for his economic policy, which columnist Lu Gang compared favorably to the policy of former Chinese leader Deng Xiaoping.

(Okay, maybe it’s not the worst comparison, considering that Deng Xiaoping was an economic reformer who dragged post-Mao China into prosperity by introducing free market principles into a centralized socialist government, but in America, simply putting the words “Rand” next to “socialist,” regardless of context, is bound to make people angry. So at least we’re still a world leader on the Kneejerk Reactionary Index.)