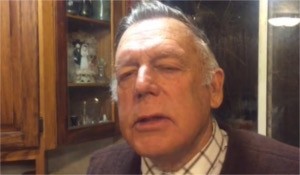 Cliven Bundy, the Nevada rancher who led an armed standoff against federal officials last year, gave a video interview to the Las Vegas Review-Journal regarding his son Ammon‘s seizure of a wildlife refuge in Oregon, which ended Tuesday night in a confrontation with federal and state authorities that left Ammon and six of his followers arrested, and one of his followers dead.

The whole affair, Cliven said, would be a “wake up call to America.”

“This whole battle is over a constitutional issue,” he added, “where the federal government has no rights within the states.” Bundy appeared to be expanding on this thought when the video dissolves to another part of his speech. He continued:

This is a total disaster, to be happening in America, where we have, I’m guessing, federal people killing innocent people. I’ll tell you one thing. My sons and those who were there were there to do good. No harm was intended. They were never threatening anybody, they was trying to teach people about the Constitution […] and trying to make sure that this type of abuse that happened to them tonight didn’t happen to other people, and yet it did.

On Jan. 2, Ammon Bundy led a self-proclaimed “militia” to occupy the Malheur National Wildlife Refuge, calling the occupation a protest against federal management of lands in the western United States. Last Wednesday, after three weeks of inaction, Oregon Gov. Kate Brown blasted federal officials for allowing this “spectacle of lawlessness” to continue.