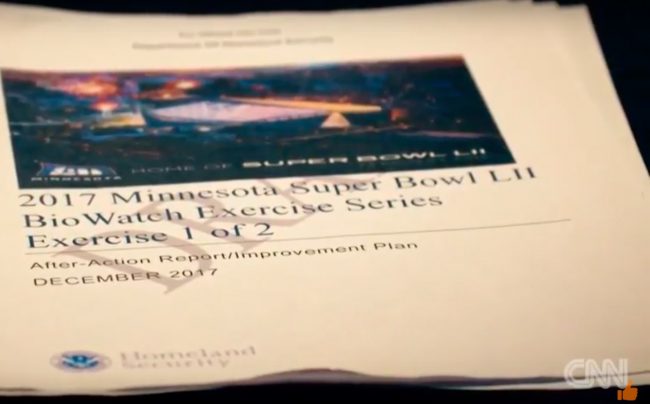 A CNN employee discovered sensitive government materials in the seat-back pocket of a commercial plane, including an evaluation of a simulated anthrax attack at the Super Bowl.

The document describes exercises conducted by Department of Homeland Security program BioWatch which were undertaken to assess the readiness of Minneapolis public officials to handle a bioterrorism attack. The conclusion reached was that there were areas of improvement, such as that “some local law enforcement and emergency management agencies possess only a cursory knowledge of the BioWatch program and its mission.”

“The biggest consequence of this mistake may have less to do with terrorists knowing our vulnerabilities and more to do with confidence in the Department of Homeland Security,” Juliette Kayyem, a former DHS official, told CNN. “In the end, confidence in the federal government at a time of crisis is what the American public deserves.”

“This exercise was a resounding success and was not conducted in response to any specific, credible threat of a bioterrorism attack,” agency spokesman Tyler Q. Houlton said to CNN. Further, the media outlet was told that the areas of improvement outlined in the document had been addressed before the Super Bowl.

Still, there are other documents in the folder CNN retrieved that DHS has told them to keep under wraps, as they could “threaten national security.”

“[Leaving those documents was] a really stupid thing,” Kayyem said. “Who knows who else could have picked this up?”