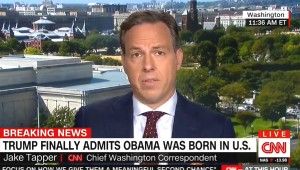 After duping the press into covering nearly 30 minutes of endorsements, Donald Trump made a brief statement Friday morning hoping to lay to rest his half-decade championing the conspiracy theory that the president was not born in the U.S.

However brief the statement was, CNN’s Jake Tapper noted that it was still riddled with assertions that were factually inaccurate.

Trump claimed that Hillary Clinton and her campaign started the birther movement and that he was responsible for ending it. “Those are two factually false statements,” Tapper said.

He noted that some of Clinton’s supporters transmitted “reprehensible” and “garbage” conspiracy theories about Obama, “but she and her campaign never, ever started the birther issue.”

To Trump’s second point — taking credit for Obama releasing his long-form birth certificate in 2011 — Tapper said that this could hardly be said to “end” the birther issue, since there was never a legitimate question about the president’s place of birth in the first place. “It was a crackpot conspiracy theory. Donald Trump fueled it. And then after Barack Obama released his birth certificate, Donald Trump said that it was fraudulent or suggested that it was fraudulent. And he kept up this birther nonsense long after 2011.”

Trump refused to acknowledge the president was born in this country until Friday. It was not clear when or why the candidate came around on the matter, as Trump quickly left the stage and did not take questions from reporters after making his statement. Though he did invite the cameras to take a tour of his new hotel.