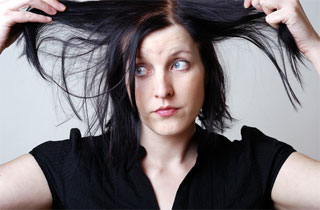 “I have sometimes turned down chances to blab on TV because my hair was dirty,” begins an actual article written by an actual woman, about women are responsible for being under-represented in political punditry. And this is legitimately her argument: women are worried less about advancing their careers on television, and more about things like OMG they need concealerrrrrr because like their eyes are puffy and also UGH their hairrrrrrrrrrr.

“A quick canvass of my female colleagues reveals that I am not alone,” writes Margaret Wente in The Globe and Mail. “A top expert in international relations told me she sometimes passes up a television invitation if the show doesn’t do makeup. She thinks she looks awful on TV without it.

“This isn’t vanity, my friends. Nobody remembers what you say on TV. What they remember is how you looked. Men can get away with dirty hair and baggy eyes. Women can’t.”

Somewhere in this article is a legitimate point about how women in the media are subject to tougher standards than men: how to look, how to present themselves on TV, how to balance careers and motherhood, how to properly scream at one another and lob memorable/dumb/memorably dumb ad hominems and land on Mediaite’s front page, etc. There may also be a second legitimate point, that the “old boys’ club” of journalism, “consciously or not, keeps replicating itself and shutting women out.”

Somehow, that’s lost underneath Wente’s point that women are, at the end of the day, women are “hard-wired” to be risk averse, and what is more risky than telling your opinions to the public, right ladies? Oh! OH! And television producers are actually looking for female voices in the wrong place:

The scarcity of female voices in the media isn’t as bad as people think; they’re just not looking in the right places. Foreign affairs and politics, the so-called hard news topics, are still dominated by male voices. But the subjects that tend to interest women more – education, health, food, fashion, relationships – are full of women’s voices. The largest-circulation magazine in Canada isn’t Maclean’s; it’s Chatelaine. The biggest TV star in the firmament isn’t a news anchor; it’s Oprah Winfrey. Women are not especially drawn to duelling political pundits. They’d rather watch The View (which is a bunch of women having coffee and discussing the real issues of the day).

…but wasn’t her original point that women are under-represented in the hard news topics? How is pointing out that women are unconsciously segregated into “soft” news topics a boon for Wenthe? And doesn’t that actually reinforce the sexist premise she intended to rail against in the first place?