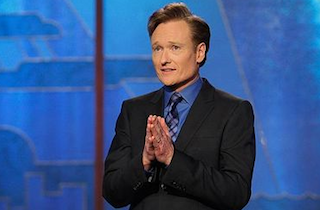 Late-night host Conan O’Brien, who is headlining the White House Correspondents’ Dinner this year, spoke to POLITICO ahead of the event. O’Brien discussed various aspects, ranging from how difficult the gig is to which presidents provide the best material. Asked about where to draw the line with jokes, he also noted he won’t be aiming to irk “the guy who controls drones.”

Alluding to the “singe but not burn” notion, POLITICO’s Patrick Gavin asked O’Brien where he draws the line at “going too far.”

“You know it when you see it” was how O’Brien defined his rule, admitting that it’s hard to avoid a few “ooh’s” at such an event, but that he aims to be able to go to sleep that night. “I don’t want to hurt someone’s feelings,” he informed. “I want to be funny, and I’m not up there to make anyone incredibly uncomfortable and certainly not the guy who controls drones. That’s going to be in my mind the entire time: This man has a joystick in his lap and he controls drones — and my income tax.”

That guy who controls drones, President Obama, also happens to not to be the easiest to poke fun at. Comparing Obama to President Bill Clinton, O’Brien agreed with other comedians who feel that Obama isn’t “a big, juicy comedy target.”

“With some presidents, you feel like it’s shooting fish in a barrel, but that’s not the case with Obama,” O’Brien explained. “And then you feel like, if I just do something with the ears, that’s too easy, or it can feel like it’s a cop-out. I’m just hoping that he throws up on a world leader between now and then.”

Gavin and O’Brien also spoke about how the media landscape has changed since O’Brien last headlined the WHCDin 1995, during an era without The Daily Show, The Colbert Report, and Real Time With Bill Maher. Quipping that “we’re probably 10 years from everyone in the country having a talk show,” O’Brien praised the “explosion in political comedy.” He drew a contrast with Stephen Colbert, noting how Colbert’s appearance at the dinner was in character, which is difficult to pull off in such a setting.

“My whole philosophy is that if it works in the room, it’ll work everywhere else,” O’Brien said. “And I’m not a character, so my goal is to figure out a way to make it work in that room.”