Concha: 2014 Spring Graduation Season Now the Winter of Our Discontent

Concha: 2014 Spring Graduation Season Now the Winter of Our Discontent 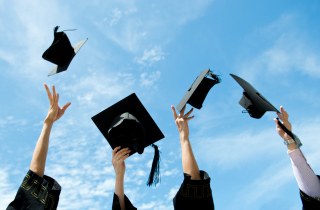 The great “You got to look out for number one, but don’t step in number two!” 1986 speech given by freshman Thornton Mellon at Grand Lakes University (Back to School), for example, who finished the year with all Ds and one A (the high mark given to him by a female professor whom he was sleeping with). The awkward but charming address by Diane Court (the one-hit wonder Ione Skye) with an utterly-captivated Lloyd Dobler (John Cusack) looking on in awe in 1989’s Say Anything.

Fictional scenarios, of course. But if the cartoonish events around commencement in 2014 are any indication, truth really is stranger than fiction.

The latest example comes out of Rhode Island, where an ABC affiliate reported earlier this week that the Arthur R. Cole Middle School had decided cancel an honors event due to it being “too exclusive”.

The school’s principals stated that “members of the school community have long expressed concerns related to the exclusive nature of Honors Night.” They wouldn’t share how many parents felt that way, of course. It could be a strong majority; it could be a handful of too-loud-and-annoying-to-deal with (more on that in a moment). No matter…the school—without putting it to anything resembling a vote—simply decided to cancel the event. The everyone-gets-a-prize culture slowly permeating this country wins again. As for hard work and acknowledging achievement, well, that takes a back seat to sensitivity.

But literally as I was writing this, the school announced this morning that the honors ceremony was back on. The reason? Parents—even those who didn’t have kids being honored–reportedly went ballistic. But the damage is still already done, because when this ceremony does happen, rest assured the talk that night will be more about the original decision by the school and less about the kids themselves. As a recent move to the suburbs has shown, parents really, really like to gossip about anything involving what they see as injustice against their children.

Another example comes out of Florida, where a high school in Bradenton is charging $200 for prime seats (the first ten rows) at its graduation ceremony. The most disturbing part? Parents are actually paying this amount as if it was a Florida-Florida State game. The tickets sold out in less than four hours. And since the financially-challenged school is already on a roll, it’s even charging grandma and grandpa (seniors) $20 just to get in the ceremony.

This year’s graduation will cost about $12,000, according to the principal. The school district used to give the school $3,000 to help pay for the ceremony, but this year announced it will no longer do so. A decent idea would be to ask local businesses (Champs Sports and Tropicana are headquartered there, for example) to pay to sponsor the event (banners, programs, etc.) but that would make far too much sense.

Then there’s Rutgers ceremony, which we discussed in depth here. To review, 50 students out of 45,000 undergrads (.001 percent of the population there) decided to protest Condi Rice—the first African-American female Secretary of State—speaking at its graduation ceremony. From there, a few professors jump in. Many in the media here in New York/New Jersey portray these tiny protests as the next Kent State. The Rutgers Board of Governors offers zero pushback on its decision to select her.

Rice—currently a professor at Stanford–not wanting to distract from the ceremony, politely backs out. For those keeping score at home, that’s Snooki 32000, Rice 0 (in terms of the number of dollars earned in speaking at RU-sponsored events). Rutgers gets hammered by conservative media, applauded by progressive media. And in the middle of this hot mess are graduating students and parents watching their ceremony become a national cacophony, er, conversation.

The protests just don’t pertain to Republicans, either. Students at the Harvard Graduate School of Education insist the administration take back its invitation to Democratic Colorado State Senator Michael Johnston because he “embraces a vision of education reform that relies heavily on test-based accountability.”

A worthy debate? Sure. But for some, debate is no longer part of the equation. There’s a saying around my way or the highway that seems to be picking up steam. But Johnston isn’t backing down and will speak in Cambridge on May 28, where he says he’ll tackle the issue head on. That’s not how things ended at UC Berkeley and Smith College, where protests compelled the original speakers chosen to back out of those respective ceremonies.

And then there’s the story out of Connecticut on Monday of a woman attempting to prevent her family from finding out she had dropped out of college. What does she do? Not much…just call in a bomb threat to a commencement ceremony at her now-former-school, Quinnipiac University. Police say Danielle Shea left college earlier this year because of financial issues, (including for unpaid tuition), but according to Associated Press, her mom “continued to pay thousands of dollars she thought was for her daughter’s education.” Shea was arrested while wearing a cap and gown (cue creepy music).

But in 2014 and the odd era of sensitivity and intolerance, well…let’s just say a growing number are looking out for number one and stepping in number two.