Congressman Loses Cool To Students With A Flip Cam, But Comes Out The Hero? 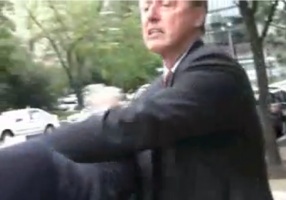 No he’s not a hero. He’s a jerk. But…as is always the case, there is more to the story.

The democratization of communications technology (flip cams, home editing suites and YouTube) is generally lauded as a great advancement for civilization (and for the most part, it is.) But during a time of heated partisan divide — caused, in part, by a Balkanizing landscape of opinion media — well, one wonders if we really want an army of aggressive college kids accosting public servants until someone eventually loses their cool.

Take for example, the following clip of Rep. Bob Etheridge (D-NC) who responds rather physically to some unidentified individuals who ask if he supports the “Obama Agenda.” Seemingly out of no where, Etheridge clearly loses his cool – acting out in a disproportionate way to the seemingly innocuous question. But somehow, one gets the sense that there are legions of viewers out there that will be happy with his reply.

Last week, Democrat Congressman Bod (sic) Etheridge (D-NC2) attended a fundraiser headlined by Speaker Nancy Pelosi. He was asked by some students on the street whether he supported the “Obama Agenda.” He didn’t take it well.

Expect more of this. A hard, progressive left captured the Democrat majority in Congress and forced them to enact a fantasy grab-bag of legislation that is increasingly unpopular with the American public. We’re on the cusp of a deeper recession, millions of unemployed Americans have no prospect for work, taxes are about to spike higher and we’ve maxed out the national credit card. The Democrats were given a chance to run government and they’ve only succeeded in running it into the ground.

So, yeah, Democrats who are up for reelection this November are a bit testy.

So yeah, if Big Government (the site that gave us the hidden camera video that took down ACORN) is telling us to expect more of this sort of inflammatory and guerrilla interview tactics, well then, we should be seeing more of this. And that fact is not lost on many elected officials who are probably on edge, half-expecting to be ambushed around every corner. Such is the case here.

Etheridge’s actions are only partially defensible. He need not have gotten physical with the students who asked him the provocative question regarding his support of the “Obama Agenda” (honestly, that sort of opening question is straight from the Jason Mattera school of inflammatory interview techniques.)

But little is known about these “students.” The YouTube video is published under an account titled TonyManization, and even more damning is that the faces of the individuals asking the Congressman questions are blurred out. Hmmm…nothing like the courage of the anonymous protester.

Which brings us back to Etheridge’s response. Yeah – he comes off as a jerk, but…when in Rome. It will be interesting to follow how this story plays out in the news media. Will it be a big story? Probably not, but apparently being prepared for ambush interviews from eager college kids is the next phase of media training for many on Capitol Hill.

Edit. note – this post has been slightly edited for clarity from an earlier iteration.