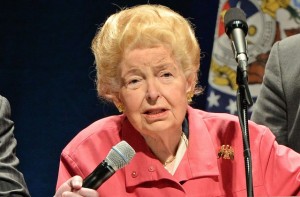 Phyllis Schlafly, one of the most well-known conservative family values advocates in the country, has died today at age 92.

Eagle Forum, the group Schlafly founded over 40 years ago, posted the following message on their website:

Today, Phyllis Schlafly passed away in the presence of her family at her home in St. Louis, Missouri.

An iconic American leader whose love for America was surpassed only by her love of God and her family, Phyllis Schlafly, an indomitable pro-family grassroots advocate and organizer, was 92 years old. Mrs. Schlafly was preceded in death by her beloved husband Fred and is survived by six children along with 16 grand and 3 great grandchildren.

Phyllis Schlafly spent an astounding 70 years in public service of her fellow Americans. Her focus from her earliest days until her final ones was protecting the family, which she understood as the building block of life. She recognized America as the greatest political embodiment of those values. From military superiority and defense to immigration and trade; from unborn life to the nuclear family and parenthood, Phyllis Schlafly was a courageous and articulate voice for common sense and traditional values. She authored 27 books and thousands of articles. She spoke tens of thousands of times across the United States.

Her joy in life was evident to all through her smile and wit. Funeral arrangements are pending.

Schlafly, famous for her controversial views on feminism and the Equal Rights Amendment, was a very vocal Donald Trump supporter. There was some recent controversy within Eagle Forum over that endorsement.