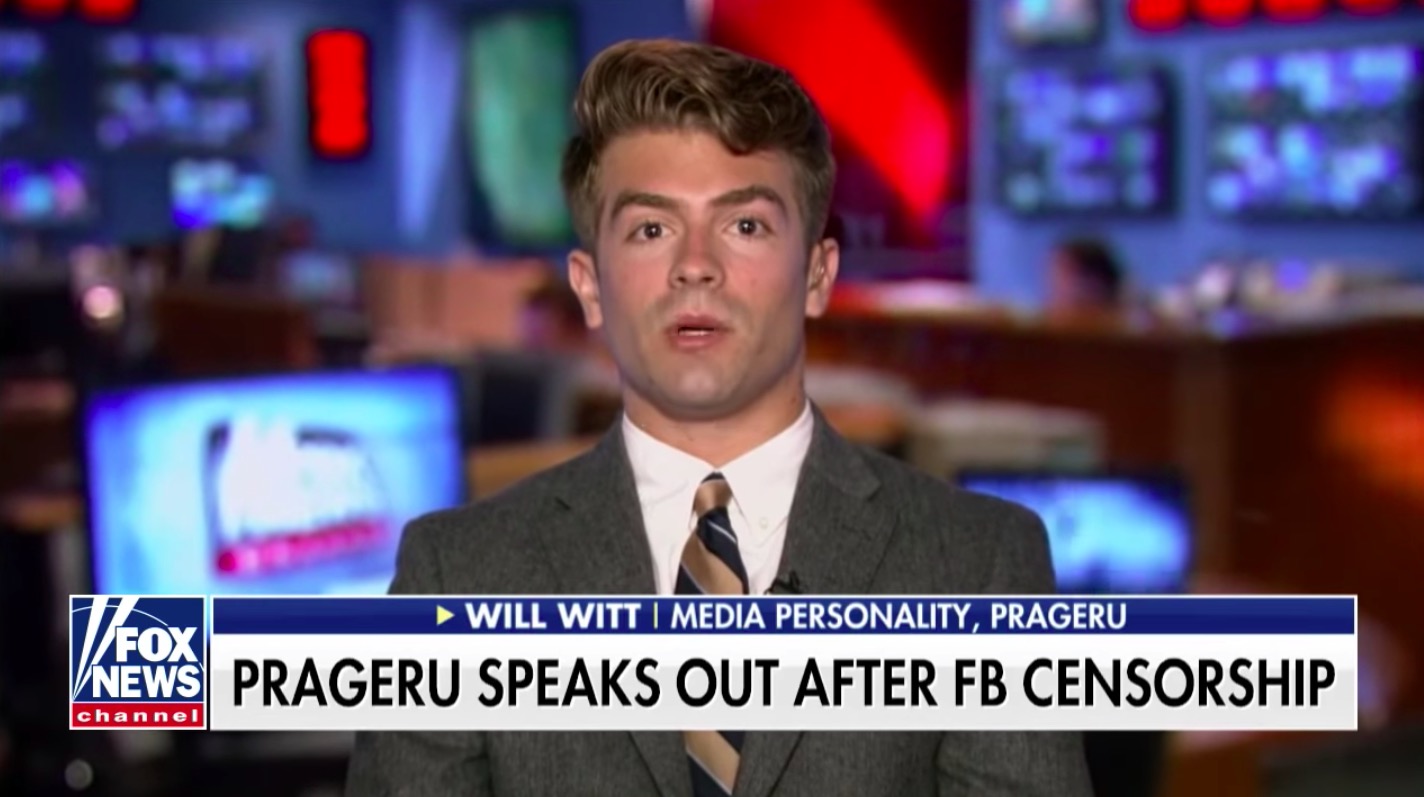 Will Witt is a popular social media influencer and personality at the conservative nonprofit PragerU — a reactionary digital outlet known for its viral lecture videos, which often focus on combating progressive views on sexual politics and rape. One widely-shared PragerU video claiming there is “no evidence of a national campus rape epidemic,” for example, has earned the outlet notoriety.

Witt, who posted that PragerU clip on college sexual assault to his popular Facebook page, can be seen calling rape “hilarious” while holding down a young woman in a video sent to Mediaite. “Yo, Rape is hilarious,” Witt says into a camera while sitting on a water fountain and using both of his hands to hold a woman face-down in his lap.

Witt and others near the video can then be heard laughing at the comment while the person filming a Snapchat video of the scene references Witt’s employers, saying, “Yo, Witt — from PragerU?!” The video appears to have been taken in West Palm Beach, Florida, where the right-wing youth group Turning Point USA held their annual conference for young conservatives last December.

Mediaite contacted Witt and PragerU numerous times over email, text, and in phone calls but did not receive a response.

In his past comments on the subject, Witt tweeted in March that cultural opposition to “toxic masculinity” amid the #MeToo movement is just a way to “further demonize men,” since there is “nothing masculine about rape.”

Toxic masculinity is a made up term. There is nothing masculine about rape, murder, and sexual assault.

The left calls these things masculinity to further demonize men on their journey to destroy gender.

Witt, who previously worked for TPUSA, is a popular conservative media personality on sites like Facebook and YouTube. The 22-year-old college dropout frequently appears on networks like Fox News and the BlazeTV to rage against supposed liberal bias on college campuses and the leftward shift of America’s youth. His Instagram and Facebook pages have amassed 122,000 followers and nearly 130,000 likes, respectively, with most of his popularity stemming from his work with PragerU where he holds the staff title of “Social Media Influencer” and is a main on-camera personality — along with the organization’s namesake Dennis Prager and Candace Owens.

The nonprofit, which was recently described by Vanity Fair as “one of the most effective conversion tools for young conservatives,” was started by Dennis Prager, a right-wing talk radio host and columnist for the conspiracy website WND. PragerU is funded by billionaire fracking brothers Dan and Farris Wilks and acts as an anti-university of sorts — a place to push back against progressive views and promote various conservative ideas via video lectures shared on YouTube, Facebook, and Twitter.

These explainer clips feature stars of the movement, like Ben Shapiro and Candace Owens, as well as fringe figures, like comedian Owen Benjamin, best known for arguing that white people should be allowed to say the n-word.

A sampling of PragerU’s most popular videos, which in total have racked up over two billion views, includes an explainer disputing college rape statistics — posted a year before the #MeToo movement — that claims there is “no evidence of a national campus rape epidemic and there is certainly no evidence that sexual violence is a cultural norm in 21st Century America.” The video also argues that the real rape culture problem is treating young men like they are “guilty because accused.”

Other videos feature a middle-aged white man arguing that feminism makes women “second-rate men,” a depiction of indigenous people as cannibals, and an explainer on the “Suicide of Europe” caused by the “mass movement of peoples into Europe… from the Middle East, North Africa, and East Asia.”

Witt’s PragerU videos have racked up tens of millions of views and they typically feature the 22-year-old wandering around progressive spaces and attempting to trigger passersby in man on the street interviews on topics like U.S. history and capitalism. His Thanksgiving video at Cal State Northridge featured him dressed up as a caricature of an indigenous American while handing out pumpkin pie; his Valentine’s Day stunt at UC Irvine involved him wearing a MAGA hat and asking random women to go on a date with him. (They all said no.)

Dennis Prager has his own history of controversial commentary on sex. In a 2008 column series titled, “When a Woman Isn’t In the Mood,” he argued wives should sexually submit to their husbands even if they are not in the mood because of personal issues like “female nature, childhood trauma, not feeling sexy, being preoccupied with some problem, [and] fatigue after a day with the children.” The 70-year-old has also argued that false sexual assault accusations are just as bad or worse than actual rape and has written that “given the expanded definitions of rape, not all claims of ‘rape’ are truly rape.”