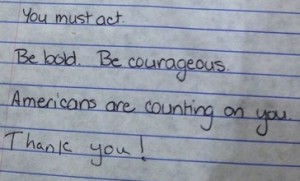 On Thursday, I reported that conservative Twitter-tracking website Twitchy led conservative outrage over former Congresswoman Gabrielle Giffords‘ handwritten testimony to a Senate subcommittee, which she composed herself, but which was physically put on paper by her speech therapist. Twitchy is now outraged that I said they were outraged, and despite Mediaite‘s confirmation that Gabby Giffords composed the testimony herself, the site falsely claims that “Giffords read from a note that her therapist gave her.”

The Michelle Malkin-run website published a tick-tock of The Washington Post‘s publication of a photo labeled “Gabrielle Giffords’ Handwritten Testimony (Photo),” which is exactly what it was. Within minutes, WaPo updated the story to clarify that the actual handwriting was that of her speech therapist. It was only then that Malkin, and Twitchy, got in on the action, expressing outrage (or some form of displeasure) at the “emotional impact” of the note, which they apparently think is lessened by the fact that Gabby wrote it with transcription help from her speech therapist. They also accused “the media” of “dishonesty,” and “lib journos” of making an “error,” even though the accurate, if infinitesimally incomplete, description of the photo was from Giffords’ own PAC, not “the media.”

Today, the site denied being outraged, and added one more falsehood to the pile:

Look, anyone who read Twitchy’s original article knows that we couldn’t care less that Giffords read from a note that her therapist gave her. To assume that we are “outraged” by her inability to write is both ridiculous and downright mean. Our issue was with the fact that the media mislabeled the photo, which leftists then promoted in a cynical attempt to use a Giffords handwriting sample as some sort of mystic talisman for gun control.

Clearly, I didn’t say they were “outraged by her inability to write,” but by the apparently unearned emotional impact of the notion that she did hand-write the note. Twitchy & co. can be forgiven for misinterpreting my criticism, willfully or not, but since they obviously read my article, they know that Gabby Giffords did not “read from a note that her therapist gave her,” she read testimony that she composed, which was committed to paper by her speech therapist because the injuries she sustained being shot in the head prevented her from doing so on her own. From Thursday’s post:

Within minutes, Jennings updated the post to note that the paper was actually hand-written by Giffords’ speech therapist, and 17 minutes after it was posted, WaPo‘s Chris Cillizza tweeted the clarification. Natalie Jennings confirms, to Mediaite, that “The therapist wrote the note pictured in the photo, but Giffords was responsible for the contents of the statement.”

Additionally, “the media” did not “mislabel the photo.” To the extent that the description was arguably incomplete, it was published by Gabby Giffords’ own Americans For Responsible Solutions PAC, which posted the photo to its Facebook page, along with this text:

“It will be hard. But the time is now. Be bold. Be courageous. Americans are counting on you” – Like and share Gabby Giffords’ handwritten testimony at the Senate Judiciary Committee on gun violence. Join her and Mark Kelly by texting SOLUTIONS to 90975

To the extent that some people on Twitter got the impression that the handwriting was Gabby’s, the minutes-later clarification was welcome and necessary, but it didn’t have any effect on the “emotional impact,” except maybe to amplify it, and Twitchy & co. didn’t “point out” the clarification, they simply lied and complained about it, while impugning the motives of people who were deeply moved by the note. Their dismissal of the note as a “mystical talisman for gun control” diminishes the power and substance of Rep. Giffords’ testimony, and in their further zeal to diminish its “emotional impact” has now led them to rob Giffords of her rightful credit for that testimony.

No one “gave” Gabby Giffords that note, she gave it to us, and not as a “mystical talisman,” but as an attempt to achieve tangible protection from the evil that robbed her of the ability to write that note with her own hand. She isn’t owed your agreement, but she deserves to be listened to.