Conservatives Shockingly Ignorant of What a Strike is, Accuse Obama of Anti-Union Comment 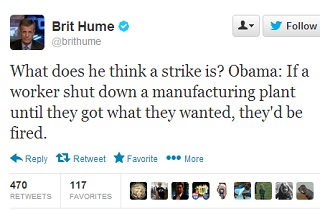 Conservatives, from Fox News’ Brit Hume to Michelle Malkin‘s Twitchy website, are beside themselves with glee over what they are calling an anti-union, anti-strike remark by President Obama in his speech Thursday morning. Not surprisingly, the ranks of conservative America have turned out not to be experts on the most rudimentary aspect of the unions they hate so much.

In case you missed it, President Obama was drawing an analogy to the Republicans’ current refusal to reopen the government they shut down, and told the crowd this:

“Because the deal is you’ve already gotten hired,” the president continued. “You’ve got a job. You’re getting a paycheck. And, so, you also are getting the pride of doing a good job, and contributing to a business, and looking out for your fellow workers. That’s what you’re getting.”

“It shouldn’t be any different for a member of Congress,” Obama concluded.

What does he think a strike is? Obama: If a worker shut down a manufacturing plant until they got what they wanted, they’d be fired.

Michelle Malkin’s Twitchy did their usual thorough job of recording, for posterity, all of the other conservative idiots who don’t know what a strike is. Perhaps they will update it once they receive feedback from an average 5th-grader, who could tell them that unions are democratic bodies that decide, collectively, whether or not to strike. It’s the exact opposite of a single worker deciding, on a whim, to shut everything down because he doesn’t like the boss. Hopefully, this clears everything up, and conservatives everywhere will embrace that democratic process.