Contested Conventions Are Sexy News Fodder, But They Risk Dangerously Poisoning Democratic Will 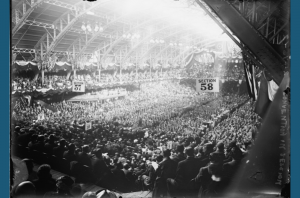 Every news cycle these days and each block of cable news programming seems devoted to talk of a brokered/ contested/ shitshow convention for the Republican party in Cleveland this summer. In short, the media is running wild with fantastical imagery of a situation at the end of this bizarre tunnel where controversial frontrunner Donald Trump can be upended by a challenger more in-line with establishment values, one that more likely speaks to the core of idealogical conservatives.

It’s a wonderful game to play, this sort of twisted reality for people in political media to drive a few more storylines. The imaginations of those looking for a hotly-debated tour de force in Cleveland this summer are playing out on the grandest scale, perhaps the creative dreamscape of such unthinkable drama and political prowess that only this election deserves. Will Mitt Romney emerge out of nowhere to crash the stage in Cleveland? Will Paul Ryan rent a white horse for the convention to make his grandiose arrival? Will Rick Perry don black trunks and boots like Stone Cold Steve Austin and bum rush the Quicken Loans Arena to ‘stun’ the field and take the nom for himself?

The two GOP candidates trailing the frontrunner are both calling for a contested convention, increasingly the only likely scenario where either of them — Texas Senator Ted Cruz or Ohio Governor John Kasich — can snatch the nomination from Trump’s tiny hands. Just this morning on GMA, Cruz defiantly opined, “We’re going to go into a contested convention.” Just weeks ago, Kasich happily editorialized, “Of the 10 Republican contested conventions, only three times did the front-runner become the Republican nominee.” The Ohio Governor even recently hired Charlie Black, who famously stirred up hoopla at the 1976 convention on behalf of Ronald Reagan, looking to challenge incumbent President Gerald Ford in his reelection bid (Reagan failed, barely).

And the talk of a contested convention is not relegated simply to the right; Vermont Senator Bernie Sanders, who finds himself trailing in the delegate count against former Secretary of State Hillary Clinton heading into Tuesday’s New York primary, has also long said he will take the fight to the Democratic convention in Philadelphia. Sanders campaign manager Jeff Weaver told MSNBC two weeks ago, “[W]hen we arrive at the convention, it will be an open convention, likely with neither candidate having a majority of pledged delegates.” They are building a convention coalition of sorts to challenge Clinton in the case she does not lock up the nomination through delegate-rich states like Maryland, California, and New Jersey.

Even RNC Chair Reince Priebus pointed to the infamous 1860 contested convention in Chicago as evidence of the effectiveness of the process: “It was the same system that put Abraham Lincoln into office.”

While any opportunity to tie the spiraling GOP of 2016 to the legacy of Abe Lincoln is a noble attempt, the reality is that the convention in question — the same one cited by the RNC Chair as the exemplary model — was an exercise in dirty politicking at its worst. It brought together the likely nominee — fan-favorite New York Governor-turned-Senator William H. Seward — with an orator in Lincoln coming off a losing Illinois senatorial campaign. Nothing indicated that Lincoln should have walked away with the nomination from Chicago in May 1860, until “Honest Abe’s” campaign manager (the ruthless David Davis) wheeled and dealed cabinet seats to influential party bigwigs in exchange for later-ballot support. As the Chicago Tribune further notes, “To make sure a friendly crowd was on hand to out-shout the competition, batches of [counterfeit] admission tickets were printed at the last moment and handed out to Lincoln supporters, who were told to show up early.”

For all the screaming and yelling going on in the Trump camp these days about the hooked system of party conventions, the real estate mogul and political outsider has a valid point: the primary system began in Minnesota in 1899, large in part to challenge the notion that political machines could steal the nomination away from the will of the people. Due to the unique structure of Colorado’s state-wide convention, Cruz took home all 34 available delegates while Trump kicked dirt on the sidelines, foreboding the issues that could arise at a potential Cleveland stalemate (he dangled the carrot of “riots” in the event of a nomination block).

Although it is admirable for candidates such as Cruz, Kasich, and Sanders to will their organizers and supporters behind the energy of a contested convention, the process dangerously corrupts the democratic will of the voters. Donald Trump currently has an estimated two million more popular votes than Cruz nation-wide, and the next block of voting states are all favorable to the real estate billionaire. In fact, if there is one group that disproportionately does not support Trump for the nomination, it’s Republican officials themselves. Out of 333 elected Governors, Senators, and Representatives, only 11 have endorsed the controversial Trump campaign (for comparison, Kasich with his paltry 144 delegates has secured 13 endorsements). The true will of the people as promised through the democratic process are clearly identifying two stand-out candidates this cycle (sorry Berners, establishment support aside, Clinton has secured 2.5 million more votes than Sanders pre-New York).

Headlines, talking points, and clever-ish thought pieces on contested conventions are sexy these days, but people should reconsider the ramifications of undermining the voice of the people. It is largely the same voice of disenfranchised voters railing against the party norms that support a Trump candidacy anyway, and sabotaging their voices for the same of GOP status quo sends a perilous message to the electorate. At least if Bernie Sanders loses, the Clinton camp will likely have some leg to stand on for its victory outside of the establishment support; but as for Trump, any movement or motion towards a Cleveland contested convention may jeopardize the integrity of the process, proving his campaign rhetoric to be correct: “The system is rigged, it’s crooked.”