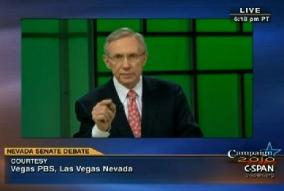 Sen. Harry Reid debated Sharron Angle last night in Nevada, and it put on display why the Majority Leader of the U.S. Senate could lose to someone who has consistently made gaffes and odd statements during this campaign.

Angle went after Reid in several places, including a strong “Man up, Harry Reid,” regarding Social Security. And while she may have stumbled over some issues, it was nothing like the performance Reid had. He appeared flustered throughout the debate, including the very end during his closing statement when he lost his notes and had to ad-lib his way through.

But most notably, there was the answer Reid gave about health care. And mammograms. And colonoscopies. When it happened, the collective Twitter political and media world let out a 140-character gasp:

Insurance companies don’t do things out of the goodness of their hearts. They do things out of a profit motive and they have almost destroyed our economy…We need them to be forced to do mammograms. That’s why you see Breast Cancer Awareness Month. You see the baseball players wearing pink shoes and the football players having pink helmets. It’s because people dread breast cancer. And you don’t get breast cancer. You correct breast cancer. You detect it if you do mammograms. Colonoscopies. If you do colonoscopies, colon cancer does not come because you snip off the things they find when they go up and, no more. And we need to have insurance companies do this.

Graphic. As cable news recaps the debate, it is proving to not be a particularly good night for either campaign, but again…only one is the Senate Majority Leader.

You can watch the full debate here, or check out the insta-ad put out by the Reid campaign regarding Angle’s answer to the health insurance question: