Critic: Sarah Palin Is A ‘Creature Made By TV’…And Destroyed By TV 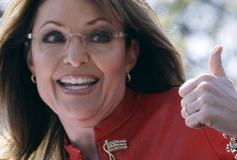 It always sounds nicer when the Brits say it, right? Okay, not necessarily in this case. Roy Greenslade, writing in the Guardian describes Sarah Palin as a phenomenon–or, in the headline, a “creature”–created by television and ultimately, he argues, destroyed by television. “Do you remember that uniquely American political phenomenon Sarah Palin? Of course you do, but you have been hearing and seeing much less of her lately. And no wonder,” he writes.

Greenslade mentions recent polls suggesting Republicans may be less enamored of Palin, and quotes critics who insist any shot Palin might have had at the White House has passed. And then there’s John Doyle, the TV reviewer at Canada’s Globe and Mail, who concludes that Palin’s rise and fall tracks can be credited to television:

It was television that destroyed Sarah Palin, just as it made her… The arrival of Palin as a major political figure in 2008 was an emanation of the reality-TV culture, anchored in the belief that ordinary or ‘everyday’ people, inarticulate though they may be, and with all the baggage of messy personal lives, are truly compelling public figures.

Palin was the political equivalent. A figure who refracts national identity as it is shaped by the culture’s most powerful medium. Authentic, populist and dismissive of sophistication in thought and action.

Doyle, discussing the reality show Sarah Palin’s Alaska, says the show delivered “a river of platitudes and patently insincere assertions” and Palin “made dubious attempts to make political parables linking her family, the outdoors and wildlife. It was ego unbounded.” As a result, Doyle concludes “the political obituary can be written now.”