Crowd Heckles Cops at White House: ‘Brown Shirts,’ ‘Looks Like Something Out of Kenya’ 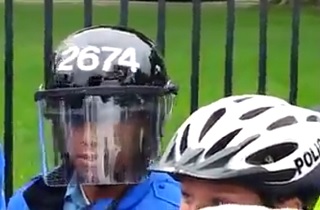 As we reported earlier, a protest that started at the World War II Memorial ended up in front of the White House, where protesters piled up barricades that had been used to keep people out of the memorial during the government shutdown. Police, some in riot gear, were called in, and while news reports showed some of the confrontation, raw Youtube video of the protest reveals members of the crowd heckling the officers, calling them “brown shirts,” the “Gestapo,” the “Stasi,” and opining that the unit “looks like something out of Kenya.”

The so-called “Million Vet March” demonstration was attended by at least some non-veterans, including Senators Ted Cruz (R-TX) and Mike Lee (R-UT), and was marked by the flying of a Confederate flag at the White House. In this video, which records the arrival of the police, then documents the confrontation in extreme closeup, you can hear more of what the crowd shouts at the police, including “You work for us!”

One of the things the Uniformed Secret Service and other DC law enforcement organizations do for Americans is protect the White House, which includes not letting people pile up a bunch of ladders in front of the White House fence. The north side of the White House is a frequent site for protests, and the Secret Service don’t usually engage them at all unless there is a threat to the perimeter, whereas even tourists who climb onto the base of the fence to get a better view are quickly dealt with. You can protest all you want, as far as the cops are concerned, just don’t mess with the fence.