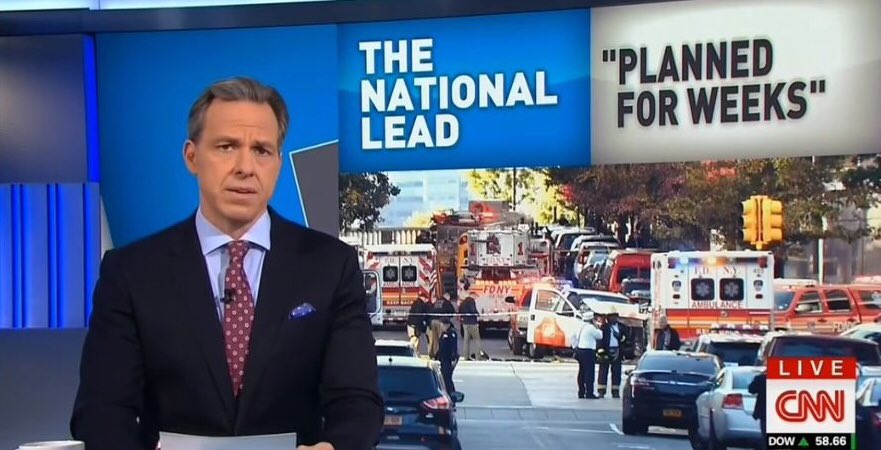 A few months after this reporter suggested the Daily Caller work on their “reading comprehension,” it seems that it might be time for the far-right tabloid to work on their listening skills as well.

After publishing the blatantly misleading implication that CNN host Jake Tapper praised the New York City terrorist’s use of “Allahu Akbar” in his attack that killed eight people, the Daily Caller managed to correct their story, double-down on it, and demand the CNN reporter “apologize to America” for his reporting.

The lede of the original Caller story — which can be accessed via a web archive — reads, “CNN anchor Jake Tapper called the Islamic phrase Allahu Akbar “beautiful” minutes after reports of a terrorist attack in New York City.” This was coupled with the headline, “CNN’s Jake Tapper Calls Allahu Akbar ‘Beatiful’ After Terrorist Attack.”

However, what Tapper actually said was, “The Arabic chant ‘Allahu Akbar, ‘God is great.’ Sometimes said under the most beautiful of circumstances and too often we hear of it being said in moments like this” — which, read in its full context, is a condemnation of the attacker’s use of the phrase (as explained by Tapper in a tweet.)

After being called out by Tapper and others, the official Daily Caller account tweeted, “The story is objectively true by even the strictest journalistic measure, caught on tape, in fact.”

Nicholas Givas‏, the author of the misleading piece, continued the tabloid’s double-down by tweeting, “CNN’s @jaketapper coming after me and @DailyCaller for doing a piece on him using his own words — Good luck in the ratings Jake! I hear you’re doing great.”

As for Givas, his only other reporting experience appears to be for American Action News — a fringe conservative site focused primarily on posting right-wing memes on Facebook. Though Givas doubled-down, the Daily Caller issued a correction to the piece.

The corrected version of Givas’ article includes a disclaimer saying, “The Editor in Chief has updated this copy to make the terminology more accurate, though the spirit of the story remains identical.” The lede was also changed to, “CNN anchor Jake Tapper felt the need to immediately compliment the Islamic phrase Allahu Akbar — saying people said it in ‘beautiful’ circumstances — minutes after reports of a terrorist attack.”

This morning, Daily Caller editor-in-chief Geoffrey Ingersoll demanded in an editorial that Tapper “apologize to America” for his “bending of the knee” to “Muslims.”

“We corrected the copy, Mr. Tapper, but it’s not substantively different. In fact, I think it looks worse for you,” said Ingersoll — proverbial shovel in hand as he continued the tabloid’s best attempts at digging a deep hole.

Tapper took to Twitter yesterday to tear into Daily Caller and Fox News — which followed the tabloid’s lead and published the same claim against him. The Lead anchor also said the two conservative outlets were “lying” in their attempt to “smear” him and went on to group Daily Caller and Fox News with the racist, conspiracy mongering site InfoWars, as Tapper suggested they are all on the same “slime-coated path”

While Fox News did delete their controversial tweet against Tapper, InfoWars and Daily Caller chose to stand by their misleading reporting.