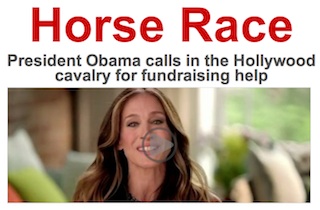 Hey, remember a couple months ago when the Democrats were pushing the “War on Women” angle and every conservative and their mother (who is totally allowed to stay at home, by the way) were desperately trying to say it was unfair and overly provocative. Well, if you recall, after the Hillary Rosen flap, both sides agreed that it was probably time to put the “War” handle away. Fortunately, it appears that The Daily Caller has helped us enter the new phase in the political battle of the sexes; the War on Women is over, we are now in The Bitchy Cat Fight on Women.

Last night during the MTV Movie Awards, the Obama Campaign premiered a new ad aimed at teens starring actress Sarah Jessica Parker. As we all know, there’s nothing that makes conservatives more insecure than their lack of hip celebrity supporters (Don’t worry, guys! You’ve got Clint Howard!). This causes them to viciously attack Hollywood any chance they get. Therefore, it’s no surprise that Parker was going to take some heat from the right-wing blogosphere. However, the Daily Caller’s attack is perhaps the most hilariously petty thing I’ve ever seen a supposedly serious news outlet do.

The big headline on the Daily Caller right now simply reads “Horse Race.” It then features a picture of Parker from the ad. If you click on it, the headline of the article is “Sarah Jessica Parker sticks her nose into 2012 campaign.” Here’s how it begins:

For those of you that don’t read the kind of trashy, sub-Perez Hilton gossip columns that the Caller apparently now aspires to, “Horse Face” is a common nickname used by people who dislike Sarah Jessica Parker. So, basically, a national news site has decided that, since an actress likes a candidate they don’t, they should take up a third of their front page mocking the size of her nose. It’s as awful as if Media Matters did a huge expose counting the Koch Brothers‘ wrinkles.

But, guess what? This whole thing gets even more hilariously boneheaded. Directly (and I literally mean directly) below the Parker story on the front page is an article having a hissy fit with this headline “Latest target of Larry Flynt’s misogyny: Ann Coulter.”

Just let that delicious irony sink in for a minute. Yep.

Damn, that is hilarious.

The Flynt post is now off the homepage but we have the screenshot here: 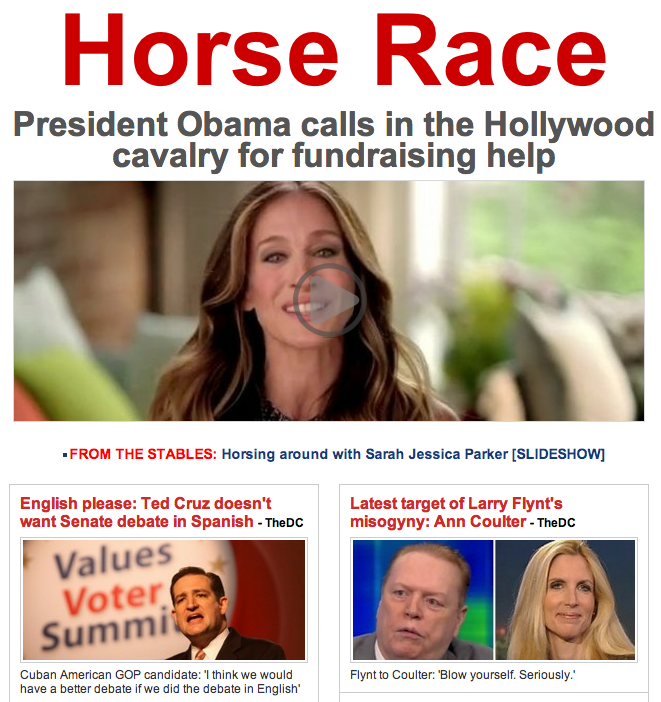 What do you think it sounded like in the Daily Caller editorial offices?

We, of course, are not the only ones taking umbrage. Over at our sister site, The Jane Dough, Amy Tennery isn’t exactly thrilled either:

“Disagree with a woman’s politics? Why deabte the issues when you can make fun of her appearance!

In a moment of sheer, head-slapping sexism, The Daily Caller decided to use a near-decade-old joke about Sarah Jessica Parker looking like a horse. This for a story that, presumably, is all about her involvement with the Obama campaign. Classy.”

Gosh, aren’t election years so much fun? They bring out the best in all of us.