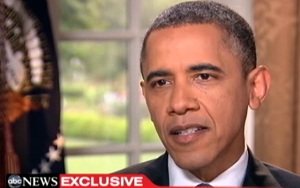 Following the President’s announcement Wednesday, several cable news hosts made the comparison of gay marriage with efforts to abolish slavery and Jim Crow, which were opposed by people who cited, among other things like the Bible, the idea of states’ rights. The irony is that, during one of the many stops along the way in his evolution on the subject, President Obama himself once invoked states’ rights as an argument against the Defense Of Marriage Act, or DOMA.

In my view, if you believe that marriage inequality is unjust, then you must necessarily believe that it is not an issue that ought to be left up to the states, or even to the people. Our Constitution is set up to protect against the tyranny of the majority, and nowhere is this more evident than in the issue of marriage equality. Up until 1967, it was legal for states to outlaw mixed-race marriages. The Supreme Court put an end to that with Loving V. Virginia, concluding that “Marriage is one of the ‘basic civil rights of man,’ fundamental to our very existence and survival.”

A basic civil right like marriage is not subject to the whim of the majority, or the winds of politics. We’re born with it, even if our fellow human beings, and those who lead them, refuse to recognize it. Therein lies the discomfort that many people feel with the President’s seeming endorsement of gay marriage as a state issue. But is he really endorsing that view?

In a portion of his interview with Robin Roberts that was not immediately made available yesterday, the President said “I continue to believe that this is an issue that is going to be worked out at the local level, because historically, this has not been a federal issue.”

Roberts interrupted him, pointing out that it didn’t work out so well for gay marriage in North Carolina on Tuesday. The President responded “What I’m saying is that different states are coming to different conclusions. I think it’s important to recognize that folks who feel very strongly that marriage should be defined narrowly as between a man and a woman, many of them are not coming at it from a mean-spirited perspective. Some of them are friends of mine.”

He went on to explain what he would tell those folks to try and change their minds. “As much as I understand where they’re coming from,” he said, “when I meet gay and lesbian couples, for me, it has tipped the scales in that direction.”

In that section, the President is definitely paying lip service to the states’ rights crowd, but if you look closely, he doesn’t actually endorse the idea. He simply says he believes the issue will continue to be decided at the state level, because it always has been. This is a bit of a walk back from what he said in New York last June, which again, can be interpreted not as an endorsement of states’ rights, but an acknowledgement of the facts on the ground, and an endorsement of the result.

Even given those kind interpretations of the President’s remarks, his critics (like my pal Meghan McCain, and even, yes, me) would be well within reason to cast them as lacking in courage. In a perfect world, President Obama would be saying that marriage equality is a civil right, and should not be subjected to the whims of popular majority.

However, I think we have all misunderstood President Obama’s role in the march toward equality. We have all wanted him to play the pioneer role, the crusading Martin Luther King figure, but his successes, like the monumental repeal of “Don’t Ask, Don’t Tell,” have been the result of his ability to thread the needle between public opinion and his own political power. In that respect, he’s much more like LBJ than MLK, and his current acknowledgement of the states’ rights crowd, his assurances that he doesn’t see them as monsters, is in service to maintaining that delicate balance between wanting to make change happen, and being in a position to do it.

The President’s DADT strategy worked so well because it was perfectly timed at every step. He never gave opponents of the repeal anything to push back against, and I believe his strategy with marriage equality was meant to mirror that one. I think he miscalculated, because even notwithstanding the Joe Biden-fueled hysteria, if the intent all along was to roll this out at the convention in September, the President shouldn’t have started the clock on his “evolution” in December of 2010. Given that time frame, anything short of becoming a creature of pure energy would have been a disappointment.

Going forward, I expect the President will be asked about the states’ rights issue, and his responses may indicate whether he’s doing the dance I think he is, or embracing it.