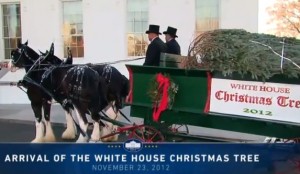 It’s War On Christmas™ time again, and damn you, Gov. Lincoln Chafee (I-RI) for making me sort of agree with Bill O’Reilly, but there is no such thing as a “Holiday Tree.” If you cut down a tree, put it indoors, and decorate it with LED lights and Santa suit-clad M&M ornaments, that’s a Christmas tree. As O’Reilly notes, that’s even the official position of the President Barack Hussein Obama administration. While others in the liberal opinion media decry the War On Christmas, what better proof than this latest skirmish is there that the conservative media-created conflict is made of win?

There are the obvious benefits, of course. Fox News gets lots of audience-pleasing content to fill the slow news days leading up to Christmas, and every War on Christmas segment generates ten fish-in-a-barrel liberal commentaries about how stupid they are, and everybody’s happy. Cable news is spared hours of effort reporting on real news, and both audiences enjoy full, warm tummies of self-satisfaction.

But better than that, the War on Christmas, which began as an effort to “keep Christ in Christmas,” has somehow forced Bill O’Reilly to not only completely uncouple the American holiday from Christ, but to declare that Christianity isn’t even a religion, and that anyone who thinks Christianity is a religion is a dumbass. You could watch a year of Colbert Reports and never see something this funny.

The Christmas tree does have some religious echoes, like the inclusion of a star or an angel at the top of the tree, but the tree is no more a Christian symbol than How I Could Just Kill a Man is a Jimi Hendrix song. Sure, there’s some heavy sampling, but the end result is vastly different. If you put a star at the top of a tree festooned with Muppet figurines and Galileo 7 ornaments, are you commemorating the birth of Christ, or the historic first meeting of Elmo and Mr. Spock? And the angels that people use on Christmas trees don’t seem to have much to do with the Bible; all of those angels were dudes. Finally, if O’Reilly hasn’t convinced you, there’s always what the Bible says about Christmas trees:

3 For the customs of the people are vain: for one cutteth a tree out of the forest, the work of the hands of the workman, with the axe.

4 They deck it with silver and with gold; they fasten it with nails and with hammers, that it move not.

By outing the Christmas tree as a completely secular creation, O’Reilly has rendered much of the War on Christmas conversation moot. Putting a nativity scene next to a Christmas tree makes about as much sense as putting Spider-man into a Justice League tableau, so shouldn’t atheists just let it happen, and laugh? They happen on the same day, but the Christmas of trees and Santa Claus is completely distinct from the Christmas of Jesus’ birth. Santa Claus (clearly an anagram for Satan Cauls), possessed of omniscience and the power to work miracles, is himself a violation of the First Commandment. Does that mean we can’t enjoy both?

As for whether you should say “Merry Christmas” or “Happy Holidays,” this has always been a simple case of manners. If I don’t know someone, I might think it rude to assume they celebrate Christmas, and say “Happy Holidays” instead. That’s the rationale behind most retailers’ use of the phrase. On the other hand, if someone decided to wish me a Happy Hanukkah, or any other holiday that I don’t observe, I would consider it rude for me to reply “How dare you? I am a celebrator of Christmas!!!”

Basically, I see little justification for people to huff laughing gas and loudly demand that people wish me Merry Christmas, just as, while I see the value in erring on the side of caution, there’s little reason for anyone to be offended by an offer of Merry Christmas. Just be cool, everybody, and enjoy the War On Christmas, which has given us gifts even greater than Bill O’Reilly, like this: