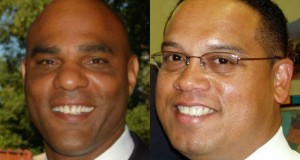 A debate in the race for U.S. Congress in Minnesota’s 5th Congressional District today sort of puts all the hand-wringing over “aggressiveness” at presidential debates into perspective. Things got super-nasty when Rep. Keith Ellison’s opponent, Republican Chris Fields, brought up some of the terms of Ellison’s 2010 divorce, while also accusing Ellison of funding research into Fields’ own divorce. Ellison lost it a little bit, calling Fields a “lowlife scumbag,” twice, and a “real gutter-dweller.”

Rep. Ellison later apologized, but after this, I don’t think anyone will be freaking out over Joe Biden‘s smile, or President Obama‘s and Mitt Romney‘s interruptions.

Things were already pretty nasty in this race, with Republican Chris Fields accusing Rep. Ellison of “reverse racism,” and convinced that Ellison funded dirty opposition research into his divorce, which Ellison denies. Rep. Ellison tried to warn him “Don’t go there” during the debate, but Fields repeated the allegation.

“You’re really stupid for bringing up your own domestic abuse allegation,” Rep. Ellison said. “I wasn’t going to say a thing about it.”

“Talk about your own (divorce),” Fields replied, “talk about the fact that you only pay $500 in child support…Talk about…”

Here’s the audio of that portion of the debate:

“Today during a radio broadcast debate, my opponent made false statements about an intensely personal family matter. My teenage daughter was present in the next room listening to the debate.

In response to my opponent’s false statement, I made an uncivil reference to him. I should not have done so. I acted beneath my personal standard as a public official, and I apologize.

In the course of this campaign, we have been focused on creating economic prosperity for working families, protecting our constitutional right to vote, and making sure that everybody counts and everybody matters–and yet, my opponent has repeatedly and personally attacked me.

I will not allow this to happen again, and I regret my action.”

Rep. Ellison, the first Muslim-American to be elected to the U.S. Congress, was once famously asked by Glenn Beck to “prove to me that you are not working with our enemies,” which he handled much better than this.