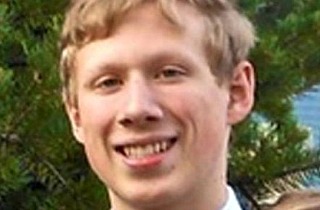 On Friday, Colorado’s Arapahoe High School was put on lockdown while a student armed with a shotgun took over the school in an attempt to confront a teacher who he believed had wronged him. The student, identified as 18-year-old Karl Pierson, took his own life before he could be taken into custody.

The gunman’s parents divorced in late 2011, according to court records. The divorce was finalized in August 2012.

Thomas Conrad, who had an economics class with the gunman, described him as a very opinionated Socialist.

“He was exuberant I guess,” Conrad said. “A lot of people picked on him, but it didn’t seem to bother him.” 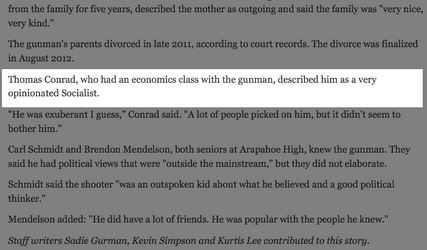 The new copy, however, edits out the specific political beliefs that Pierson reportedly held so “strongly.”

“Thomas Conrad, who had an economics class with Pierson, described him as very opinionated.”

The edited post did not remove a passage which notes how Pierson described himself as a “Keynesian” who regularly attacked the free market philosophies of economist Adam Smith.

No one is suggesting Pierson’s political beliefs had anything to do with his crime. But what is the logic for editing out a carefully reported account of who this person was in life? Why does the Denver Post not trust its readers to be able to consume the unvarnished truth?

Important questions, but don’t hold your breath for answers.