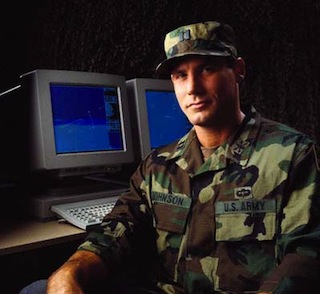 With its influence on international events like the revolutions in the Middle East, it’s clear that social media has become much more important than as merely the 21st century way to share Charlie Sheen jokes (God, remember when we had to make fun of his legal problems through fax?). And it’s not just billionaire nerds who’ve taken notice; a fascinating article in the New York Times details the Defense Advanced Research Projects Agency’s goal to employ what the Times dubs an “Internet meme tracker.”

As much as that term seems to imply our armed forces will soon be saluting General Ashton Kutcher and Staff Sergeant Cat on a Piano, it’s much more complicated then that.

“It would be useful to know, for instance, whether signs of widespread rebellion were authentic or whether they were being created by a fringe group with little real support. Among the tools the successful seeker of government funding might choose to employ: linguistic cues, patterns of information flow, topic trend analysis, sentiment detection and opinion mining.

Social networks can allow the military not only to follow but also to shape the action. In its 37-page solicitation, Darpa described how a would-be high-technology lynching was foiled: ‘Rumors about the location of a certain individual began to spread in social media space and calls for storming the rumored location reached a fever pitch. By chance, responsible authorities were monitoring the social media, detected the crisis building, sent out effective messaging to dispel the rumors and averted a physical attack on the rumored location.’”

The article goes on to discuss the challenging ways in which the project will attempt to manage opinion around the world through “inducing identities.” All I know is that it sounds like a government job where you have a totally viable excuse when caught looking at Facebook. Pretty sweet, huh? That’s why I’ve created this little demo to show why I’d be perfect for the job:

Yeah, look at that, Pentagon! With me under your employ, we’re well on our way to a puppet government on every corner of the globe!