Don Lemon to Mediaite: I Didn’t Feel Unsafe in Ferguson ‘Until Last Night’ 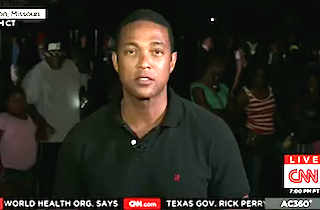 CNN’s Don Lemon arrived in Ferguson, Mo., last week along with many other national reporters and has been on the ground speaking to both key figures in the complex law enforcement apparatus that has been built up following the death of unarmed teenager Michael Brown by a police officer and the often-angry residents protesting in the streets. He spoke to Mediaite from Ferguson about his experience covering what has turned into one of the biggest news stories of the summer.

What were you first impressions of the scene on the ground after arriving in Ferguson last week?

Well, from what I had seen on the air reporting it from the anchor desk and all of the things that I had seen, I was a bit concerned about coming to a really unsafe situation. Not that I have a false sense of security, but I have not felt unsafe, until last night, was the first time I’ve really felt unsafe since I’ve been here.

When I arrived on the ground here people were coming up to me wanting to shake my hand, they were thanking me for coming because they wanted to media to tell their side of the story. And they just wanted to be heard. They just didn’t want to feel that they were being intimidated. Or that they were being occupied by a police presence. And so there was no fear or nothing. They just wanted their side of the story told and they wanted their feelings validated. So we were here and we were telling their story.

And then I left on Saturday just for a couple of hours to go and shoot something else in Louisiana and that’s when all hell broke loose. And I came back the next day, last night, to the biggest police presence that I’ve seen thus far on the ground.

What do you feel is your role on the ground as a reporter for CNN in a situation like this one and especially as it escalated last night?

I think my role is obviously to inform people, but it’s also to take people inside of the story. You’re sitting at home and I want you to feel like you’re here when I’m reporting the story. I want you to be able to smell the fast food restaurant that I’m standing next to. If there is tear gas being thrown, I want you to be able to feel it at home, that you’re almost going to cough. I know that sounds weird, but I want to explain it to the viewer in a way that takes them inside of the story. I want to take them to the story as much as possible.

That’s what I want to do, that’s why I do a lot of walking around and showing things and mingling with people. I want you to be able to feel the pain of the people that are there and to relate to the people. So, I think that’s the most important thing for me, just to be able to tell the story in a way that people at home feel that they are getting it from the best source possible. I’m not going to lie to you Matt, I want them to think that ‘I’m not going to know about this story unless I tune in to Don Lemon on CNN.’

“That’s when all hell broke loose. And I came back the next day, last night, to the biggest police presence that I’ve seen thus far on the ground.”

Why do you think the Michael Brown shooting has become such a dominant news story over the last week?

And we would be remiss in our duties as a country if we did not do something about that and reach an understanding on both sides. If we didn’t do something to bridge that gap. So I think that’s what it is: this story is a flashpoint. Many people of color relate to this story. And they’ve been treated that way by police. And so, to see that happen on the street who’s unarmed, they’re shot, they go, ‘Whoa, wait a minute, what happened?’

On a similar note, in your role as a commentator of the Tom Joyner Morning Show, you spoke out against the “willful denial” that some white people have in terms of seeing the racial attitudes that led to Michael Brown’s death. Can you just expand a little bit on that point and what you meant by that?

And if you think that, if an unarmed teenager regardless of what race does make you consider what might have happened and that racism is a possibility, then I think that you’re in willful denial. If you don’t understand that there is a disconnect between essentially men of color and police in this country, you’re in denial. If someone tells you over and over that they are treated differently by police, that police are harsher with them, that there are more African-American men who are in the system because they get stopped more often even though whites have contraband more often than blacks, numbers-wise and percentage-wise. If you hear that and you still think there is no racism involved in that, then you are in willful denial. That’s just the facts.

As a follow-up to that, how do you keep opinions like that at bay when you’re reporting live on the situation for CNN, or do you feel that you need to?

My role as a commentator for the Tom Joyner Morning Show is quite different from my role as a journalist on CNN. And I think it’s silly for people to think I can’t have a role and be objective because I have a point of view. Everyone has a point of view. From the beginning of journalism, people have done editorials. Every single journalist who people hold up to a standard from [Edward R.] Murrow to [Walter] Cronkite, they’ve all had influences. And they’ve all editorialized on television. That’s just part of journalism.

I think we’ve gotten to this place, because there’s a political divide in this country, where if someone says something you don’t like then you think they’re not objective and they must be left or right. Journalists have always had opinions and a point of view. And it’s healthy, whether it’s my opinion or my point of view, I will tell you. But just because I can do that doesn’t mean I can’t look at the facts and be objective. Of course I can, I have a brain. Everyone has a brain and everyone comes from a point of view.

I think that is short-sighted and people don’t know their history if they think that us journalists don’t necessarily have a point of view or can’t give an editorial in a broadcast.

On a slightly lighter note, I saw you tweeted a link to that image of Ferguson residents giving you the side-eye during a live report.

[Laughs] I love that…

Was that actually an accurate representation of the response you’ve been getting from people there?

Not at all, I have not had one person come up to me since I’ve been here and say anything other than, ‘Thank you for being here. I’m so glad you’re telling our story. I’m so glad you’re being objective. You are not being biased.’ I kid you not, to a person.

Those people were looking at me that way because they were absolutely interested in what I was saying. I sat there for a live shot that was supposed to be two or three minutes that turned into a 25 or 30 minute live shot. We were so entranced by what they were saying that [the producer] kept saying, ‘Keep going, this is all you. Keep talking to them, this is all you.’ And they were sharing their concerns and their opinions.

So they weren’t looking at my side-eyed, but I see the humor in it, I think it’s funny. It’s now my profile picture on Twitter. So you can take any picture of someone, if you have a screen grab, and make it look any sort of way. But the sad thing is that there are people who believe that, but I think most people get it, and I think it’s funny. You know, I have a sense of humor, so no big deal, I embrace it.

One more question for you. We’re now a week and a couple of days after this original incident. Things, as you said, seemed worse than ever last night. Where do you see things going from here?

[Heavily sighing] Listen, I am hopeful. But I think it’s very easy in these situations for things to go down, especially if one side is not listening to the other. And especially, no matter which side you’re on here, if you are in willful denial of the facts, then you can easily be stayed into irrationality. On both sides, I’m talking about.

Hopefully at this point, it can be done. But the fear on the ground — there is so much disbelief that I am a little bit afraid.