Donald Trump For President? Someone Is Polling New Hampshire To Find Out 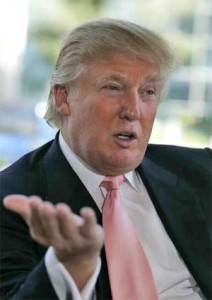 Residents in New Hampshire were alarmed to receive phone calls last month concerning the possibility of a Donald Trump presidential run in 2012. Now Donald Trump claims to be alarmed too, telling CNN that he “certainly did not” commission this poll, though he is indeed “anxious to find out what it says.”

Trump’s glowing review of the rural New England state, however, was ‘just because,’ since Trump is sticking to his story:

I never heard of this poll but I am anxious to find out what it says. I do not know anything about a poll taken in New Hampshire. … I have never run for president. I really like the people of New Hampshire because they’re strong people, they’re intelligent people, they know what’s happening to this country is wrong. So I can understand why I did well in a poll. You still haven’t told me what well means. I don’t know. What does well mean because I haven’t seen this poll?

When asked by CNN whether he would consider running in 2012, he replied:

Well it’s certainly not something I’ve talked about or would consider but I will say this, somebody has to do something or this country is not going to be a very great country for long.”

Trump, admitting that he has a tendency to be outspoken, also made comments concerning OPEC, Iran, and how smart the United States is compared to other nations, all of which you can watch below: