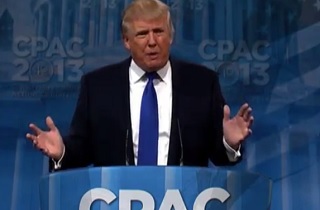 After insulting former Secretary of State Hillary Clinton as a Golden Girl Friday morning, the roster of headliners at the Conservative Political Action Conference continued to woo the groups of voters they alienated during the 2012 election. This time, former GOP presidential frontrunner Donald Trump told the CPAC audience to give up on ever earning the votes of the “11 million illegals,” even if they were given citizenship, and instead, wondered “Why aren’t we letting people in from Europe?”

“When it comes to immigration, you know that the 11 million illegals, even if given the right to vote, you know you’re going to have to do what’s right. But the fact is, 11 million people will be voting Democratic,” Trump said, and in case the message about those 11 million undocumented immigrants was lost on the crowd, added “You can be out front, you can be the spearhead, you can do whatever you want to do, but every one of those 11 million people will be voting Democratic, that’s just the way it works.”

Trump went on to describe the current push for comprehensive immigration reform, including a path to citizenship, a “suicide mission” for Republicans, a clear message that Republicans should give up on the Latino vote they just lost so crushingly. In case it still wasn’t clear, he added, “You’re just not going to get those votes.”

He then contrasted that electoral calculation with this question: “Why aren’t we letting people in from Europe?”

As Mitt Romney never tires of reminding people, the Republicans got their clocks completely sterilized by minorities and women in 2012, and immediately began to try and make inroads, particularly through renewed support for comprehensive immigration reform. Trump’s clear disdain for immigration reform, and his preference for “European” immigrants, isn’t likely to help with those inroads, and perhaps provides a preview of what the GOP has in store for future primaries.

It’s also worth noting that, in another part of his speech, Trump wondered why the United States gives military support to South Korea, which is currently facing renewed threats from North Korea. “What do we get for it?” Trump asked, rhetorically. “Nothing.”

This guy once held a double-digit lead over eventual nominee Mitt Romney, who, himself, thought that the United States could be brought to its knees by any terrorist claiming to have planted a dirty bomb somewhere. We dodged those bullets, but the party is still fully loaded.