The level of caring about facts in the Donald Trump campaign is so low, today his campaign manager just straight-up tweeted out a fake news report:

And in case it’s taken down: 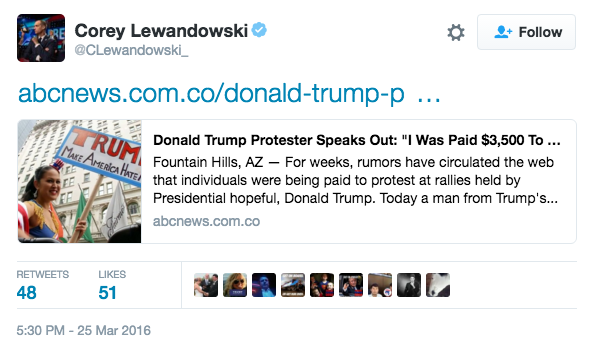 The reason he tweeted a fake news article out so eagerly may have something to do with the headline: “Donald Trump Protester Speaks Out: ‘I Was Paid $3,500 To Protest Trump’s Rally'”

This is one of those hoax sites that we’ve gotten so incredibly tired of people falling for. If you take a close look at that URL, you’ll notice the “.co” after the “.com,” a common staple of websites that attempt to fool people into thinking what they’re

The entire article doesn’t even have any jokes, like The Onion would. Instead it’s just straight-up fake news that even the dimmest person could read and immediately tell it’s fake.

I mean, look at this other headline from the same exact website: 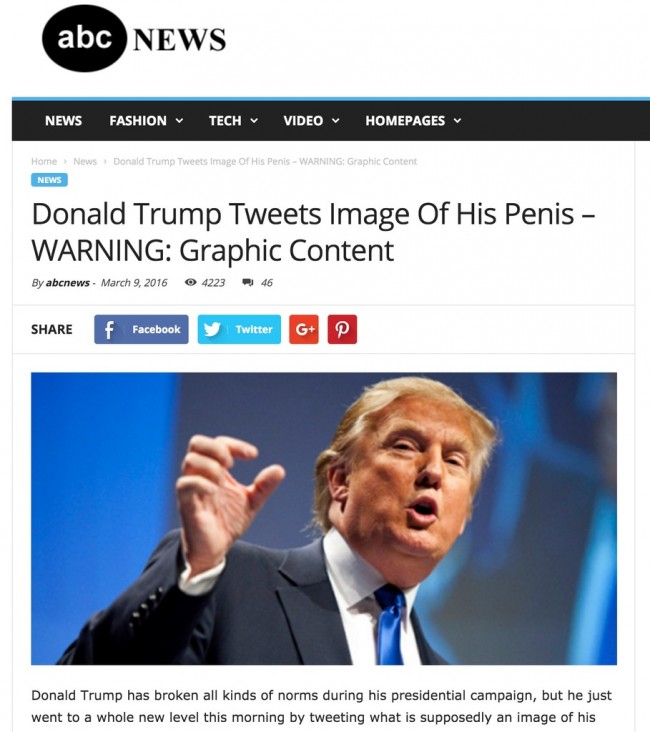 And, really, just look at this crap:

Does anyone on the Trump campaign check anything? Seriously.

(P.S. Mr. Lewandowski, you might wanna give this a read.)

UPDATE –– 6:10 pm EST: Apparently Lewandowski is not the first one who tweeted this out tonight, as minutes before he tweeted it out, Ann Coulter did:

ABC: Paid Trump Protester: "No one still has an AOL email address except people that would vote for Hillary Clinton.”https://t.co/xKJ17061sY

We’ve also tracked down the origin of the photo that appeared in the hoax post, from this IB Times article.