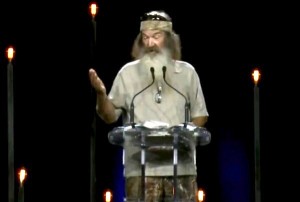 The Western Conservative Summit is the gift that keeps on giving, if by “gift” you mean open running sores of derp. Remember Phil Robertson, the guy from Duck Dynasty whose multiple hateful obsessions couldn’t knock him off the air a few years back? Well, the bearded charmer washed up on the Denver Convention Center stage this weekend to spout folksy Bible-based hatred to an eager crowd, but in the usual mix, Robertson offered up ironclad proof that Jesus was real.

You might be asking yourself why a person of faith would even try to offer proof, since the whole point of faith is that it can’t be proven, but stick with Robertson here, his logic is pretty unassailable:

That’s good to know, especially for worshipers of Roman gods like Janus and Mars, who are also immortalized in our calendars, dude.

Robertson also did not disappoint on the hatefulness front. Later in his speech, the Duck Dynasty patriarch went on a riff about how there were 160,000 murders in America while we were fighting wars in Iraq and Afghanistan, and it’s kind of intriguing to wonder where he was going with it:

Now, if you’re a normal person, you might think this is leading to something about gun control or mental health, and if you’re a Trump fan, you probably think the answer is either more guns or fewer blacks, but if you know Phil, the answer is obvious:

Yes, folks, it’s the gays and the transes who are killing 160,000 people every dozen or so years. Robertson’s gay panic is so epic, even other homophobes get a little nervous around him.